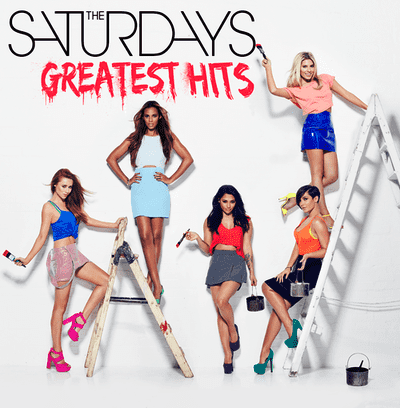 HTF had the lovely pleasure of speaking to Mollie King who is part of one of the UK’s biggest girl bands right now, The Saturdays. We discussed their upcoming Greatest Hits album, as well as their tour in September and the question everyone is wanting to know, are they splitting up after the tour?! That and so much more! Check it out below!

HTF: Hi Mollie, thank you for taking the time to talk to Hit The Floor today. How are you?

Mollie: Oh I’m really good thank you, how are you?

HTF: Yeah, really good thanks. Now, we believe you shot the new music video for your new single in Greece, how was that?

Mollie: Oh it was amazing! Yeah it was so good, it was really nice to be away with the girls and be in the sunshine. I’m really excited to watch the video and see it back.

HTF: Yeah, we’re really excited to see it too. Can you give us a hint of what the song is going to sound like?

Mollie: Erm it’s definitely an upbeat party track. Erm, its really a feel good anthem and fits in very well with summer. It’s been produced by Xenomania who did a lot for Girls Aloud so yeah I’m hoping it’s going to go down really well.

HTF: Oh ok, because this single is going to be your 18th release, is this why you’ve decided to go ahead and release a Greatest Hits album?

Mollie: Yeah definitely, it felt like a really good time to do it because we’ve had so many singles out, we achieved our number one last year so yeah it definitely felt the right time.

HTF: Are there any big promotional plans for the single coming up before you release it?

Mollie: Well we’re going to be doing a lot of TV performances and we’ve got some summer dates before the tour so yeah just the usual really, a lot of radio chats and everything.

HTF: The Greatest Hits includes all your previous 17 singles and three new tracks. Are the new songs a new sound or are they a continuation of the sound from your last album ‘Living For The Weekend’, which was more of an upbeat album?

Mollie: Yeah, I think it definitely is, this new one is definitely quite a dancey feel good sound but it’s more towards ‘What About Us’ and ‘All Fired Up’ kind of thing. But yes, there are three new tracks so kind of a mixture of sounds but not all the same, so it’s quite nice that there will be something for everyone.

HTF: If you had to pick a single on the Greatest Hits that is your favourite, which one would it be?

Mollie: My favourite on the Greatest Hits would have to be ‘Notorious’ because I really love the music video or ‘Higher’ because it’s such a sing along track and a classic pop song that is also a fan favourite.

HTF: Yeah, those are our favourites too along with Disco Love!

HTF: I’m sure you saw this question coming but does a Greatest Hits album mean you girls are splitting or taking a break soon?

Mollie: No, not at all! Everyone keeps asking us if this is the end but it’s not because after the tour we’re going straight in the studio as we plan to release a new album by the end of the year. So not at all!

HTF: Oh ok, that’s such good news! Which would you say is your favourite Saturdays album released?

Mollie: Erm… Ooooh… I couldn’t pick to be honest. I love the first one because it reminds me of when we were first getting together. Ooh.. probably the first.

Mollie: Aww yeah, thank you! I liked that one as well. To be honest I really like them all! I’m such a pop music fan so I just love all our songs!

HTF: So along with the new album, you girls have decided to do a Greatest Hits tour too in September. Are you excited to be back on the road touring again?

Mollie: YES! Oh my god, it’s my most favourite thing to be touring! So I love being on the road and going to all the different cities and getting to meet the fans. As a performer you kind of dream about being on tour so I can’t wait to get on that stage again!

HTF: Have the rehearsals for the tour started yet then?

Mollie: Our rehearsals normally start a month before, but we’ve got our first meeting next week where we’ll discuss all the planning for it, for all the costumes, all the staging, everything really, the choreography so it all starts next week.

HTF: Oh that’s good then! What would you say is your favourite thing about going on tour is?

Mollie: Probably just all the performing every night you know, and performing all our songs to our fans. It’s such an incredible feeling to be up there and hear them singing your lyrics back to you. So I’m pretty much looking forward to all of that.

HTF: So we’re assuming the tour is going to be one massive celebration then?!

Mollie: Yes, yes it is! It’s going to be like one massive party. Even if you haven’t bought a Saturdays album before, you’re still going to know all the songs that were released as a single.

HTF: Yeah, because you girls have been together as a group for seven years now. The time must have just flown by, right?!

Mollie: Yes, oh my god – it’s gone so fast. If you would have said when we first started that seven years down the line I would have been like ‘oh my god’.

HTF: We remember when ‘If This Is Love’ first came out!

Mollie: Ah god I know! It seems like a different life time!

HTF: And what would you say is the key to your longevity is?

Mollie: I think the fact that we have the same goals and and we want to achieve so much together as a band, but we’ve also been allowed to do our own thing alongside the band, is a big reason why we’ve been together so long. No one has ever felt trapped or that they couldn’t do anything else, so we’ve really managed to kind of keep doing our band life and then our own projects as well.

HTF: And not only that, you’ve managed to sell over five million records worldwide which you must be really really proud of?!

Mollie: Wow, that’s amazing – yeah I know that is mental!

HTF: And most of those sales are from the UK, which must make you feel really good?

Mollie: Yeah it’s amazing to know most of those sales are from home but it’s really weird to get your head around it all but it’s such an incredible feeling!

HTF: Have there been any other girl bands around the period of time you girls have been around that you’ve really enjoyed too?

Mollie: Yeah! I love girl bands so I really love Little Mix and also Girls Aloud who basically gave us our launching pad, so I love both of those.

HTF: Do you still ever get to see the Girls Aloud girls at all or not?

Mollie: Yeah we do actually, quite often at different events. It’s quite nice when you see a familiar face so yeah the girls are lovely.

HTF: Who have you met that you’ve been most starstruck by?

HTF: Now we have a few Twitter fan questions for you:

@Fr0chelle: Will there just be one single from the Greatest Hits Album?

@FiercenessArmy: Will there be a Greatest Hits Live Tour DVD?

@MolunaArmy_x: If you could be one person in the world, who would it be?

HTF: Oh, we thought you were going to say Britney!

Mollie: Well Britney is obviously my idol and has been for a long time but I just feel that Victoria Beckham looks like she’s just having such a good time and she does so much travelling so yeah. Oh an being married to David Beckham wouldn’t be bad either! *laughs*

@ILOVETHESATS_: Would you rather collaborate with Little Mix or Neon Jungle?

Mollie: Oooh probably Little Mix because I know the girls quite well.

@Hannanar: Are you ever going to release the ‘All Fired Up’ tour DVD anytime soon?

Mollie: Yeah, we love it over there so we should be going over there in the next couple of years.

@JenniKidd95: What is your favourite photoshoot you’ve done and why?

Mollie: That is a tough one! I enjoyed doing the photoshoot for the ‘On Your Radar’ album artwork. It was a really cool shoot. So probably that one.

@TheBeanboy23: Were the Barbra Streisand’s on the Headlines tour when you said people’s names recorded previously in a studio or said live?

Mollie: They were recorded already but we picked fans out in the crowd before we came on so we had to pick out a few on the day.

HTF: So that’s all the Twitter questions done! Thank you for taking the time to chat to us today and we hope to catch you girls on your upcoming tour!

Mollie: Aw thank you so much!