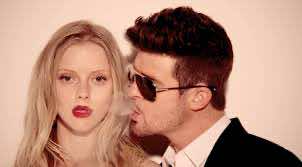 His chart-topping track ‘Blurred Lines‘ has been named top selling single in 2013 so far, despite only being released in May.

The single, featuring Pharrell and T.I., has sold 1.36 million units.

It’s good news for Pharrell Williams too, who is also featured on the UK’s second best selling single – Daft Punk‘s ‘Get Lucky‘, with 1.24m unit sales.

In third place is Avicii’s ‘Wake Me Up‘ (980k), closely followed by ‘Let Her Go‘ by Passenger at 910k. Other top singles include Naughty Boy‘s ‘La La La‘ and Macklemore & Ryan Lewis‘ ‘Thrift Shop‘.

Do you think ‘Blurred Lines’ is a deserved winner? Have a listen and let us know what you think!