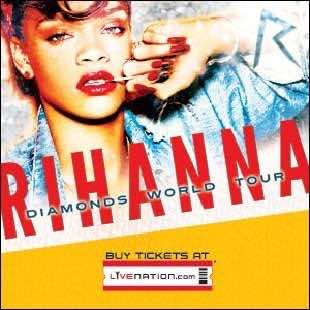 The MTV VMA’s sparked a lot of conversation about the Bajan beaut this week. As well as performing on the night, her new pixie hair cut got fashion bloggers swooning and her onstage kiss with a grey-haired Chris Brown incurred frowns and head-shakes from watchers and fans afar. So this was the perfect time for Rihanna to announce some big news.

Her ‘Diamonds World Tour’ begins in March 2013 with a show in New York followed by 26 dates across cities including Chicago, Los Angeles, Toronto and San Diego. More dates around the world will be announced later.

“Rihanna’s going on tour!” Her Facebook reads. “Get ready for the DIAMONDS WORLD TOUR hitting a city near you in 2013!”

The pop princess has been working on a follow up to last years ‘Talk That Talk’ for a majority of the year so she will no doubt be promoting her unfinished seventh studio album throughout the tour. We can’t wait to hear what she has in store!