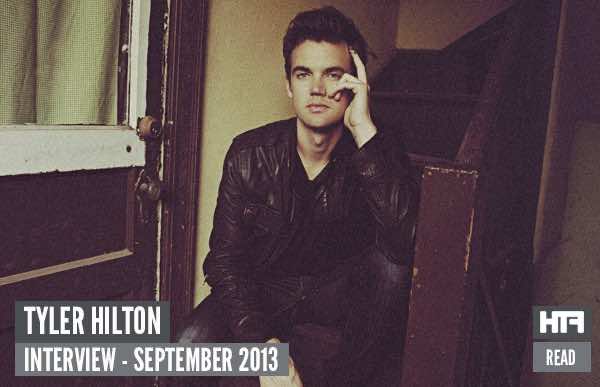 We had the lovely pleasure of catching up with American singer-songwriter and actor Tyler Hilton.  He’s currently gearing up for his first UK headlining tour next month, but he managed to find the time to have a quick chat with us!

We discussed the upcoming tour, starring in a Taylor Swift music video and what it was really like playing Chris Keller in One Tree Hill.

HTF: Hey Tyler! Hope you’re well! How has your summer been?!

Tyler Hilton: Amazing! I love me some summer!

HTF: We’re excited that you’re touring the UK next month, what do you love the most about England?

Tyler: The fans are insane and I love that. Their excitement is something different than I’m used to. I wish I could feel that everywhere! And I love your trashy magazines! I only get to read them when I tour there.

HTF: We were lucky to see you when you supported Boyce Avenue on their UK tour last year – what was that like? How did you find the UK fans?

Tyler: That tour was an absolute dream come true! I had been wanting to tour the UK for forever but wasn’t sure if I had fans there or what, so I just asked Boyce Ave, who had been friends of mine, if they wouldn’t mind if I tagged along with them and just tried out the UK. We all lived on the same bus for that tour and just had a blast!

HTF: What’s life like on the road? Do you enjoy it?

Tyler: My world on the road always ends up feeling really small which is ironic because that’s when I’m seeing the most places and meeting the most people! But really my life becomes about whatever I’ve packed, the people I’m traveling with, and not a lot else socially. It kind of feels like camp, like you’re in a smaller microcosm that doesn’t feel like real life. I miss it so much because it’s a huge part of me. Just like I miss home when I’m gone for a while. I need it. I get an itchy soul when I’m home too long.

HTF: What can we expect on this upcoming UK tour? Who are you bringing with you as support acts?

Tyler: There are going to be different local supports in each town, which will be exciting to get to hear a bunch of new artists, as well as Paighton supporting most of the UK dates. And this time I’m bringing along my friend Jon Skaggs to play percussion. He always tours with me in the states and he’s never been to Europe so he’s over the moon!

HTF: The tour will support your latest album ‘Forget The Storm’, what’s the reason behind the title?

Forget the Storm is a reference to an album I was making on Warner Bros Record called The Storms We Share. It ended up taking far too long to make and sort of dissolved my relationship with Warner. I was disappointed and confused afterwards because this thing I’d worked so hard on was never going to come out so the song that helped me grieve that record I put into a new one called Forget the Storm.

HTF: Do you have a personal favourite track from the album?

Tyler: My favorite track is Loaded Gun. I never don’t smile when I’m singing that one.

HTF: What about your favourite song to perform live?

HTF: There was an eight year gap between ‘The Track Of’ album and releasing ‘Forget The Storm’ – what was it like to finally release this album and what was the reaction like from fans towards this new material after such a long time?

Tyler: It was nerve wrecking to release this after so long. The reason it took so long was because of the above reason, for having a record get completely scrapped that I had finished and loved. When Forget the Storm was done and about to come out I was so proud of it, but there’s so much pressure put on whatever’s taken that long to come out. The truth was, that record was made fast and instinctual and was good for my soul. The fans seemed to really like it and it brought me over to the UK for the first time!

HTF: Where do you get inspiration from when song writing?

Tyler: Listening to other music that inspires me, reading, living my life and doing things that have nothing to do with music…and other then that I don’t know! It’s like a dream sometimes, a song just pops into your head and you can’t tell if it’s something you heard or it’s new and you got to write it down.

HTF: You said listening to music inspires you, so who would you say are your musical influences?

Tyler: There are so many musicians I grew up learning about music with like Elvis Presley, Frank Sinatra and Muddy Waters. Nowadays I love Kings of Leon, John Mayer and Keith Urban.

HTF: Is there anyone you would love to collaborate with and why?

Tyler: I’d love to do a duet with Kelly Clarkson I think. I played a show with her recently and she was hands down the most amazing singer I’ve ever heard live!

HTF: We think that would be cool, we’re big fans of Kelly Clarkson! Now music has been part of your life from an early age, but what influenced your decision to pursue music as a career?

Tyler: When I started making more and more tips playing at the coffee shop I was always playing at in High School! I thought well, this is money and keeping me out of a real job so let’s keep it going and grow it!

HTF: But if you weren’t doing music what would you like to be doing instead?

Tyler: The easy answer is acting because I love it as well. But probably some sort of writing. I love to write stories, scripts things like that.

HTF: Now speaking of acting, you’re probably most commonly known for your role of Chris Keller in One Tree Hill and after a five-year break you recently returned – what has that been like going back to acting? And what was it like to play Chris Keller?

Tyler: I had the time of my life! It felt like a second high school or college experience doing that show. We were all really close. I did some other movies in the mean time like ‘Walk the Line’ and ‘Charlie Bartlett’ but it was so fun going back to that show. There’s something about that character that makes me laugh every time I read a new script with him in it. You just never know with him!

HTF: You’re a successful actor, singer and songwriter, but if you could only pick one what would it be and why?

Tyler: Music comes out of me most naturally and would be the hardest to give up forever.

HTF: Are you working on any new material at the moment?

Tyler: Always. Country music has always been a huge influence for me and recently I’ve been spending more and more time in Nashville working on my next record. It’s been making me so excited! Anything that makes me excited is good!

HTF: Speaking of country music, you starred in Taylor Swift’s ‘Teardrops On My Guitar’ music video as her love interest, how did that come about?

Tyler: She was a fan of mine at the time and I loved her first record. I had mentioned hearing her first record and liking it early on in an interview and she read it and called me and asked if I’d want to do the video with her. I was like: “How random! And sure!”.

HTF: Thank you for taking the time to chat with us, all the best with everything and we hope to see you on the UK tour next month! But lastly what have you got planned for the rest of this year and looking forward to 2014 that you can reveal?

Tyler: I’ve cleared a bunch of time to be in Nashville to work on my new record. So that’s where I’ll be when I leave you guys!

You can catch Tyler Hilton when he tours the UK next month – tickets are available from here.

Sophie enjoys all kinds of music but pop is her speciality. Loves a good boy band and knows the words to every single Taylor Swift song, like ever.