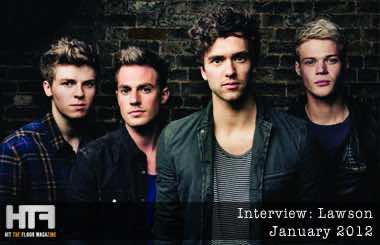 Lawson are set to be the UK’s next big boyband so HTF could not resist a chat with them! We do love a good boyband, and that is certainly what this four piece are!

We chat about them touring with one of the UK’s most successful popstars, Will Young and find out if they are excited about their headline tour of the UK, which they are currently on!

Read our exclusive interview with the band here below, we go from serious to silly as these guys clearly know how to have a good giggle!

Find out more about the band via their Facebook page here: http://www.facebook.com/lawsonofficial

HTF: Hey guys, how are you?

Joel :Really good thanks! Still buzzing from our first gig of the year in Brighton, it was amazing!
Adam: We’re currently sitting in the back of our van somewhere in Essex. Glamourous.

HTF: You were over in LA recently recording your album, correct? Obvious question, how did all that go and why did you choose that location to record?

Joel: The producer we’re working on the album with, John Shanks lives over there and I think his studio is where all the worlds guitars live haha! so I was absolutely delighted to do record all my parts there! It was just a great vibe to do the record and he felt really comfortable doing it in his own studio!

Adam: Well we begun the album in London and then we went over there to do the second half of it! It was amazing over there, we are heading back there at the end of this month. Can’t wait!

HTF: We see it’s not all serious work over there. You delighted your Facebook fans at the weekend by a naked photo. I’m guessing the weather isn’t chilly then? Haha!

Andy: hahahahaha yeah there’s plenty more where that came from! we love it over there, it’s amazing and such a great vibe, the people are really friendly, the weather is great, and the studio we’re recording in is amazing!

Ryan: Haha it’s t-shirt weather even in December over there! But any excuse to get naked really …

HTF: Another photo from Facebook: Adam and Joel, I see you both got new tattoos over there. Looking awesome, can we ask about that?

Joel: aha! I knew what I wanted for weeks and decided on the day I had off to go and get it done. It just so happened that the shop from LA Ink was just down the street, so I went in there! Its a line from John Mayer’s No Such Thing, ‘I’d like to think the best of me is still hiding up my sleeve’ so I have ‘The Best of Me’ on my sleeve (see what I did there) he’s my biggest inspiration and that was the first song I heard!

Adam: Both of them were inspired by John Mayer, we are all pretty big fans. Mine is similar to the one he has on his forearm, it’s like a stain glass window effect with 3 boxes. The first two symbolise parts of your life and the 3rd is always left black as there is always more to live.

HTF: You released a free download of ‘Red Sky’ can we expect any other single releases before the album? Has it got a release date? Title?

Joel: I don’t think we’ll ever all decide on an album name haha!! no set date for anything yet but I reckon we’ll have something out around spring time… Until then we’re just touring loooooads!

HTF: So you have obviously toured with a lot of big names such as Will Young and The Wanted to name a few. Which tour did you think that you learnt the most from as a band?

Andy: I think when we toured with Avril Lavigne it really hit home, that was amazing. That was the first time for me, when I was like ‘we can do this’ the audience sang our songs and the reaction we received was incredible!

Adam: Probably the will young shows for me, as it was an older audience who listened carefully to the music… There was no room from mistakes.

Joel: I think The Wanted’s first tour was the biggest learning curve, we’d never really played to more than about 30 people before that! So we had to adjust to performing to venues like that pretty quickly! We’re still getting used to it!

HTF: You have a headline tour of the UK starting today, this is your first one I take it? Are you scared?

Joel: We were so nervous! We took a massive leap of faith booking the venues out as we didn’t really know how many people would come down, we’ve not really done any radio or anything so we didn’t expect loads of people. We were delighted when we found out that we sold out the Manchester date and it looks like London is going to sell out too! Its pretty overwhelming! Reeeeally excited about London tonight!

Andy: All the shows are going to be so much fun, I’m looking forward to Manchester the most as its closest to home for me, and an added bonus is that it is sold out!

HTF: Have you planned your outfits yet? I’m guessing by your promo shots you guys like your image..

HTF: So is there a big bromance amongst the band? Or do you all just crush on each other?

Joel: Haha! We’ve spent that much time together the bromance is bound to blossom! We have pretty good friendships as we’re all brutally honest with each other… It gets kinda hurtful but its worth it!

HTF: You all have quite a few followers on Twitter? Do you compete against each other for followers or anything like that? Personally I have just over 500 now, I wondered if you have any tips for me? I really want to reach 1000, just so I can feel that slightly important. Haha!

Ryan: Hahaha as you said that Joel just leaned over to me and showed me he’s reached 10,000! I’m about 2 days worth of followers behind him haha… Not that we compete or anything…

Andy: not really, although I’m ahead I think it’s because I started on twitter well before the guys so managed to steal a couple of extra thousand hahahaha, there’s only friendly competition, banter as we like to call it.

Joel:Everything in this band is a competition, Andy’s pretty far ahead of everyone else but me, Ryan and Adam will fight it to the death! We always make up ridiculous competitions to decide who has to do something… Its all out of complete laziness to be honest!!

Adam: I don’t think we will ever catch up with Andy!

Joel: We had an amazing year last year so to top that its going to have to be pretty special, but I think with the release of the album and the single etc, we’re in for a treat! So that’s something to look forward to!
We’re looking forward to playing as many gigs as we can get on this year, its all about that for us! So expect a lot of shows!!!

Andy: Hopefully an amazing year, we have the album coming out and some very exciting gigs over the next few months too, if 2012 is as good as 2011 then where in for a roller coaster ride! Watch this space…..

HTF: Thanks for chatting to us guys and have an awesome tour! xx

In this article:Lawson, The Wanted, Will Young