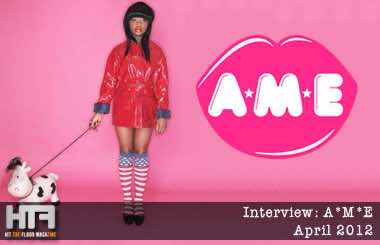 Amy Kabba aka A*M*E is the UK’s rising talented teen. Her debut single City Lights has been gathering plays from all the major radio stations, her YouTube channel is overflowing with views and her tour diary is fully booked but before her show with Lonsdale Boys Club she finds the time to chat to HTF Pop about fashion, fanzines and the 90’s.

HTF: I’m great, and happy to be here towards the beginning of your tour with Lonsdale Boys Club! How’s it going?

HTF: You have a pretty busy tour schedule ahead, with a few festivals planned and a big venue tour with JLS. Are you ready for it? Excited? Nervous?

A*M*E: It’s all of that! I would say I’m pretty ready and you can only get better and because I’m with Lonsdale at the moment I’m going to be a better performer and get a lot more experience but I’m really excited for it!

HTF: Are you planning to go to any festivals or take a holiday break during the summer or is it all work work work?

A*M*E: I think my festivals and holidays are in the work!

HTF: You’re signed to Gary Barlow’s label, how did that come about?

A*M*E: It was through some demos I did and my manager had initially had some meeting with some different labels and luckily for me a lot of labels were interested and then I went to see Future and it was the right one for me. They understood where I was coming from musically and where I wanted to go.

HTF: What made you decide on your future so soon and act on it so quickly?

A*M*E: I grew up in Sierra Leon and whilst I was over there the only form of music that was streaming in was Westlife so I didn’t really discover music a lot! Most of my musical knowledge was from my dad who was in a band with his brothers and I would go touring around Sierra Leon with them and I was really inspired. But it got to a point where I didn’t want to just in the audience; I wanted to be the person performing. So when I came to England I just snatched every opportunity that I could and secondary school was the point where I was like ‘I’ve got to dot his now’. So I joined a school choir and we did lots of festivals like Music For youth and then it just lead on from there.

HTF: There’s been a lot of press recently surrounding young upcoming music acts and whether there should be an age limit on when you can enter the music industry. What are views on it?

A*M*E: I think just go for it. I don’t think there should be an age limit. You know when you’re ready and you prepare yourself for the pressures to come.

HTF: We’ve heard a ton of demo’s and a couple of single up on YouTube, is there an album in the works?

A*M*E: I’m 80% there, there isn’t a set date yet but hopefully it’ll be released early next year, maybe end of this year. That’s all I can give to you guys without being killed!

A*M*E doesn’t just stop at music, he has likes to project her thoughts, loves of fashion, music and general banter in her fanzine called The A*M*E.

HTF: Tell me more about your magazine ‘The A*M*E’. What inspired it?

A*M*E: When I came here I had no idea what fanzines were and me and my friends always had these crazy ideas  ‘lets make our own magazine’. When I got signed it gave me more of an opportunity to do that. And it’s just an insight into what I love fashion, music, Janet Jackson, and I think it’s good for my audience to get to me on a one to one level and people can see that I’m just like them and I like Topshop like them. It’s just a good way to engage with my fans every other month.

HTF: From reading the first issue and watching your latest videos I can tell you’re quite fashion conscious. What are your favourite styles at the moment?

A*M*E: I love the whole vintage thing that’s happening now! How we’re all going back to the 90’s, which, I LOVE. I love the whole retro feel and I love Camden, it’s amazing. I like piecing my own stuff together I don’t like buying one whole outfit. I like taking bits from different shops and stalls and making it my own.

HTF: Speaking of the 90’s, what is your obsession with that year?  You only spent six years in that decade!

A*M*E: It was just great. I don’t know how to describe why I’m so obsessed with it. The music, the fashion the lifestyle in general I just absolutely adored. I think it was a great time in music where everyone was experimenting and I think it was one of the era’s that shaped music today. 90% of my inspirations are from the 90’s

HTF: Thanks for chatting with us! Is there anything else you would like to add?

Read A*M*E’s fanzine here.
Ride or Die will be available to download on May 7th at www.facebook.com/theofficialame