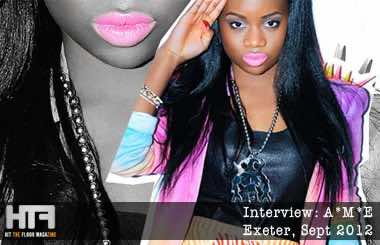 Stop what you are doing right now and listen; 17 year old A*M*E is literally the UK’s next big popstar! She was found by the one and only Gary Barlow so surely that in itself is proof how great this girl really is! With the music videos for her free singles ‘Ride Or Die’ and ‘City Lights’ already recieving a mass amount of youtube hits it is only a matter of time before this girl hits the big time! She has supported big names in the pop scene going from Jessie J to The Wanted so HTF were keen to see what was next for the youngster!

We chat with her backstage in her dressing room a few hours before she takes to the stage in Exeter supporting the one and only JLS! We chat about her amazing style, he free singles and what she has planned next! Read our exclusive interview with the star below!

HTF: Hello how are you?

HTF: It is a bit hot today isn’t it! I made the mistake of putting jeans on!

AME: Yeah I put jeans on and put tights on underneath like a proper mug but you know..

HTF: Wow! You are obviously going to change before you go on stage though obviously!?

AME: Yeah I have shorts and stuff to wear on stage so that will be cool!

HTF: So you are supporting JLS today which is really exciting, how did that come about?

AME: Erm.. I’ve done a few like support shows. During the summer I’ve done Olly Murs. Jessie J and The Wanted so this was just another one of them that got added to like the list of the tours.

HTF: That is awesome!

AME: It is really really good!

HTF: So we think your style is really individual as we have been watching your music videos and everything . We were wondering if you get styled or is it all your own ideas?

AME: I do get styled yes but for stuff like this I do it myself. I’m really into like high street brands River Island, who always give me loads of free stuff! Erm, Topshop, American Apperal and all those but for bigger things like promo or for my video shoots I’ve got a stylist called Tayma Wild. We work really closely with a company called Katy Z who give us like some awesome new clothes too.

HTF: In your video for ‘City Lights’ you have butterfly eyelashes, they are amazing! Where did you get them from?

AME: My make up artist got those, they are paper weight eyelashes and you can get some with the London eye on them. They are crazy!

HTF: The shoes you wear in that video too are also just as insane!

AME: Yeah they are Katy Z as well!

Amazing! Ok so on your official website you have a Janet Jackson part on it. Is she an inspiration for you?

AME: She is THE inspiration! Yeah I love her she is my idol so she is everywhere!

HTF: Is she someone you aspire to be like in the future?

HTF: For just 17 you have done so many amazing things at your age. Obviously you must have a lot more amazing things planned for the future. Where would you like to be say when you are 21?

AME:  I want to be what JLS are doing, having my own tour, my own headline stuff and having my album out. Hopefuly a few number one singles, I just want to be successful! I am going to just keep writing and keep singing really.

HTF: Well we definitely think you are on that path for it. On your site you also have a ‘Ask Me Anything’. Is that a bit dangerous? You must of had some weird questions on that?

HTF: Do you just keep it on there then for the lolz?

AME: Definitely but I didn’t put it on their it was my PR, so they kinda answer those type of questions but sometimes I look at them like ooo see ya..

HTF: Your most recent video ‘Ride Or Die’ you wear a horses helmet? Is that like Gaga-esque?

AME: It was a blend of myself and my stylist we are both a bit crazy and out there when it comes to stuff liek that. With ‘City Lights’ things were a bit tamed but with ‘Ride Or Die’ we went completely insane. We were just like we saw this and we want this, like a massive dress with feathers all hanging off! It was insane!

HTF: What is going to happen next?

AME: Only god knows.. I genuinely have no idea what we are going to do next but I know it is going to be quite wild.

HTF: So you put the remix out of this single for free on Facebook? Is there any particular reason why you did this?

AME: ‘City Lights’, ‘Ride or Die’ and my other track ‘Find A Boy’ written by Emilie Sande and myself they are just tasters I guess. I think it is too early to put myself on iTunes and be like ‘Hey guys buy my stuff’ when I have not yet really got the fan base for that  yet. I don’t think I am that established yet so I think it is really good to give them little freebies for now so they can get used to my music.

AME: My first single features T-Pain so I will be going over to LA to shoot that soon. I have also got my set up single ‘Play The Game Boy’ which will be getting released soon. More support acts, really looking forward to it all!

HTF: Any final words? Anything you want to add?

HTF: Brilliant! Thanks so much for chatting to us and good luck with everything!

In this article:A*M*E, Jessie J, JLS, olly murs, The Wanted