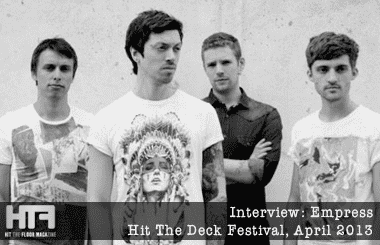 It is impossible to pin down Empress as a band, the juxtapose lashing guitars with pensive time changes amalgamating into a whole new sound that Empress have paved the way for.

With new releases on the horizon we caught up with Empress after their set at Hit The Deck  and ahead of their tour with Bring Me The Horizon. See what happened here.

You can find out more about Empress via their official Facebook page: https://www.facebook.com/Empressband

HTF: So how was the set? Did you prefer Bristol or Nottingham?

Ollie(Guitar/Vocals): Nottingham definitely, the venue was better and there were more people.

Alex(Bass): We are more established in Nottingham from what we’ve heard.

HTF: So who are you excited to see today?

HTF: Do any of your instruments have nicknames?

Ollie: Mine is just my baby,

Tom (Guitar): Your bass has a name right?

Ollie: They all involve our drummer basically.

Alex: He just loses his mind when he drinks.

Ollie: He had so much Jager I started on him it was that bad. I probably shouldn’t say anymore because he’ll read this, so he is lovely apart from that.

HTF: Any advice on how to handle festivals?

Tom: He was eating porridge in the service station.

Ollie: Yeah, just not speaking to anyone.

Alex: We just got cups of tea because we were knackered.

Ollie: It’s just not drinking loads, we knew we had to play today so we wanted to be on it.

Ollie: If you drink all day you just get to that stage where you go full zombie.

HTF: Are you all prepared for your upcoming tour with Bring Me The Horizon?

Ollie: No doubt something will happen to Ed our drummer.

Ollie: We’re trying to convince people should like us.

Alex: Not that it is a sound that people get it, and I think people liked it when we played with Cancer Bats and we were worried they might not. Like it’s big and it’s dynamic and it kind of goes between soundscapey and then really heavy then ambient stuff like that. I guess it is a bit of a journey.

Ollie: Our main thing is to just be honest because we want to write music we want to hear, and it is the same thing live, don’t try to be something you’re not.

Ollie: Our album is coming out, and then releasing videos and singles.

Alex: Download, that’s going to be huge for us.

Ollie: Our album is the main thing and getting our name out there.

Alex: We did spend a lot of time getting our shit sorted before, everyone looks at us as a knew

Ollie: We’ve been playing for about four years together

Alex: Before anyone even knew we were a band.

Give Empress a little listen here.