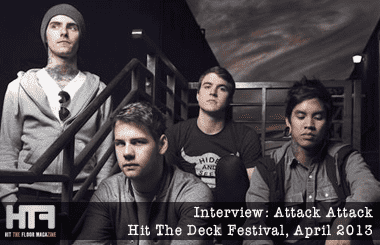 After various line -up changes we met with new vocalist Phil Druyor and guitarist Sean Bell of Attack Attack! before their set at Hit The Deck festival this weekend.

Prior to their announcement that Attack Attack! were calling it a day it is easy to see now why they were so  ambiguous about their future. Check out what happened with one of the last interviews with them here.

HTF: How’s the UK treating you?

Phil (Vocals): This is my first time here and I love it the culture is awesome.

Sean (Guitar): The band was last here about a year ago and we love it.

Phil: The buildings are sick, London was sick, Bristol was sick, I got my hair cut!

HTF: How do UK shows compare to American?

Sean: We kind of came in not knowing what to expect from the crowds with a different vocalist coming over so who knows.

HTF: How was Bristol? Do you think Nottingham can top it?

Phil: Awesome, we stayed in a hotel on a canal.

Sean: But we had to pay for the internet. But we’ve heard a lot of good things about Nottingham, we’ve heard this is the place to play shows and the venue is awesome so were looking forward to it. Although there is always room for improvement, so even if you play the most awesome show you can always top the last one but from what we’ve heard Nottingham is the place to do it.

HTF: You don’t tour the UK that often, how does it feel to be back?

Sean: All of us tour the US so much but we are all so used to the same venues,

Sean: The wifi password is already saved in your phone!

Sean: Plus it’s really cool having an accent,

Phil: It means are a little bit nicer to me when I ask for directions.

HTF: Who are you excited to see today?

Phil: This or the Apocalypse but our set times conflict!

HTF: What’s the best tour rider you’ve ever had?

Sean: With this band the rider tends to be pretty typical, but the weirdest rider I’ve ever had was in China, we didn’t ask for a rider and they gave us what they thought Americans would want – a lot of Spam.

HTF: Do any of your instruments have names?

Sean: All of them have names! It just comes to me, I just see the guitar and know what it’s called. Actually my guitar for this tour has the least interesting name, it’s the Seanigan.  I think I’m going to name my next guitar Aladdin.

Phil: That’s a pre-emptive name now you don’t even know if it’s going to call for that!

HTF: Any advice for surviving festivals?

Phil: At home it’s so hot so I’d say drink a lot of water, but it’s really dim here so it’s not like everyone is sweating all the time so maybe sleep.

Sean: Which we are a band are really bad at, we find ourselves most productive between the hours of 3am and 6am.

Phil: Honestly it’s going to be a bit of a ride for us, there are a few things that we can’t talk about just yet but the latter half of the year is going to be full of surprises.

Sean: Unfortunately our tongues are tied but good things are to come! There is so much stuff that goes on behind the scenes that people don’t realise. There are the inner workings of being in a band which is also has to be business unfortunately, realistically it sucks to think about it like that but if you can’t make enough money you can’t tour, you have to be able to support yourself. So you have to do all the behind the scenes stuff to make it work and it’s been interesting but it’s working out!