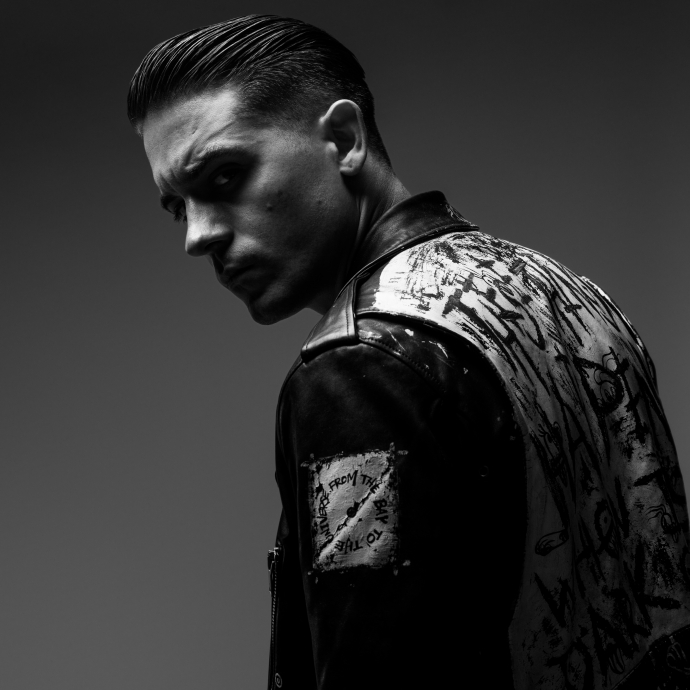 Straight from The Bay area of Oakland, California, comes Young Gerald aka G-Eazy. The 26-year-old rapper, whose previous album These Things Happen included the massive track ‘I Mean It‘, came to London recently to promote his upcoming album, When It’s Dark Out, and, following a crazy listening party that ended up in a mosh pit, we spoke to G-Eazy about the album, meeting Kanye and, of course, his love for whisky.

G-Eazy, thank you for spending some time with us today. So your track ‘Achievement’ turned me into a G-Eazy fan, but what turned you into G-Eazy?

Thank you! That’s random. Hip Hop is what I grew up in culturally and I guess music is just what I was interested in, I mean I was never good at basketball. I love basketball, but I was just never really good at it, and when I tried out for the team freshman year my best friend made the team and I didn’t, so he just said “Fuck it! I quit” and we got into music. It was what I gravitated too.

When It’s Dark Out is on the verge of being released. You’ve said it’s a “statement album”, what’s the statement you’re trying to get across?

It’s something of a concept album. It has a cohesive feel and message throughout it, but at the end of the day I’m not trying to figure out how to travel to another planet, or cure every disease. It’s just a rap album. It’s just a bunch of songs expressing how I feel at this moment in my life, cataloging this chapter.

You have some interesting names featuring on the album, who were most excited to work with?

Getting Chris Brown on my album was huge, he’s an icon worldwide! He’s a superstar, and for a kid like me everything I’ve done in music has been organic from the ground up, I don’t have a ton of hits, I’m not on the radio all day and I’m not selling tons of records. This has all come from nothing, so to get someone from his stature is insane.

It’s obvious that you really respect E-40’s long career. What advice did he give when you two worked and toured together?

He told me to ‘Stick together’. My whole team is all my best friends, and we’ve been touring together for a few years now and working together and he told me that as things start to get crazy, and no matter what happens on this rollercoaster ride of music – unity is important.

When meeting people you idolise, you love that they’re true to their image and it’s not an act. Who’s been the most satisfying to meet because of this?

Lil Wayne! The thing about Lil Wayne is that he’s kind of like an enigma, I mean he’s so much larger than life. I’ve toured with him multiple times and never met him, he’s such an enigma he’s like the Wizard of Oz. He’s very shut off from the outside world, he’s not very social and he doesn’t talk to people, so when I finally met him it was the craziest experience because he’s so cool and has so much energy!

Have you had any embarrassing fanboy moments when meeting your idols?

Yeah! When I met Kanye I was too nervous to speak. He asked me what I had planned for the year, and I was so nervous I started babbling and talking a million miles a second and he slowly lost interest and walked away!

Now we must talk about your iconic hairstyle, how do you keep it so pristine while touring?

I just slick my hair back, comb it and I’m ready to go!

What do you miss the most from home when you’re touring?

Honestly, I haven’t known what home is for the last 4/5 years. The closest thing I have to home is the tour bus. Even though I wake up in a different city, I live in the same space for a couple of months, so that’s the closest thing I have to a routine. When I do go home, it’s for 2/3 days at a time and I just moved to LA so I’m not really settled into my place yet so I had to let go of the idea of home.

We know you’re massive fan of The Beatles, have you visited the iconic zebra crossing on Abbey Road?

Of course! The last time I was here I took a picture straight away.

You’re starting to be known for your love of Whisky, have you ever thought of making your own brand and would you call it?

You’ve said that you’re never going to have kids, any particular reason why?

I’m a kid myself, I feel like I’m Peter Pan. I’m just a ‘Lost Boy’ and I don’t want to grow up, ever. I wouldn’t be able to be there for a kid, music’s hard and I would mean I would have to be on the road constantly.

Finally, for the people who’ve read this interview, which G-Eazy track do think they should go listen to and why?

Well, it depends on who the person is and what mood they’re in. There’s all these layers to my personality and it’s the same for my music. There’s a club record like a turn-up, but then there’s others which are more introspective.