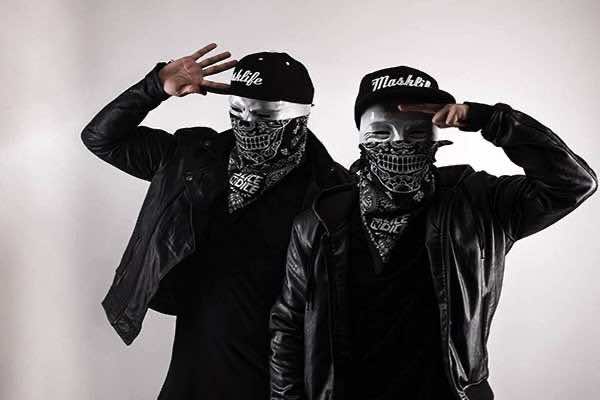 We were so excited here at Hit The Floor Magazine to have been given the opportunity to interview one of the hottest duo’s from Melbourne Australia; Slice N Dice. Their signature masks, high energy, high impact shows and tagline ‘#Mask Life‘ have earned them the respect of some of Electronic Music’s hottest DJ’s today such as Chuckie, Lazy Rich, TJR, DVBBS, VINAI and many more. These two are on the rise in the world of EDM and hopefully will be coming soon to a city near you. Take the time out to get to know the guys of Slice N Dice:

HTF: Hey guys, Adrielyn here! Thanks so much for taking the time to answer some questions for us. How are you guys doing?
SND: We’re good! We’re in our studio in LA at the moment working on our next single and getting ready for our next show on the tour!

HTF: At what ages were the both of you when you delved into the world of EDM? Any particular track trigger you off?
SND: Slice was 15 when he started listening to dance music, he got sucked in after hearing Junior Jack -Da Hype! Dice was about the same age, he got into it after listening to one of the ministry of sound ‘Annual’ compilations! So its been a while hahaha.

HTF: You stated the whole masks things came as an idea from your manager and just started as a joke. Now your fully commited, do you reckon you will do a Slipknot and evolve the masks over time?
SND: We change up the masks almost once a year, give or take if we have a cool idea, but each time we do its always becoming a little bit more elaborate. Whether it’s materials, detail, or designs, I’d say we’ll be keeping up with that tradition haha.

HTF: What would your ultimate mask look like?
SND: Ultimate mask! That’s a hard one! It’d probably be something with some really good ventilation and cooling because ours always get super hot hahaha! Something like Ironman crossed with daft punk haha super sleek and illuminated!!

HTF: How would you sum up #masklife?
SND: It’s everything about us! The secrecy behind our actual identities, how we perform on stage, how we slip in and out of venues, and our music. It’s a full spectrum kind of term.

HTF: #marklife vs #krewlife – Who wins and why?
SND: The krewella gang have got it down pat, but at the end of the day you gotta root for the home team! hahaha

HTF: We see you just came off a tour of the U.S and Mexico. How was that?
SND: It was really cool, we played at some really cool venues and festivals along side some big artists like Robbie Rivera, Bright lights, Doctor P, Neelix, and more. All the club shows really turned it up and we can’t wait to come back!

HTF: Any plans to hit the UK at all?
SND: Hopefully within the next year or so!!

HTF: You’ve said before you would love to play Tomorrowland as one of your top goals! Are we any closer to seeing that happen?
SND: Hahaha we’d like to think we’re slowly chipping away at that goal, so hopefully!

HTF: What would your dream Tomorrowland line-up be?
SND: Pretty much the way it is now, maybe some B2B sets, oh.. and us as an addition hahaha!

HTF: You recently dropped Inferno which is a pretty hot track, what gives you the inspiration to make tracks such as this one?
SND: Inferno came together really randomly. We kind of set out to make it one way but ended up as the final product that’s on beatport right now. It’s kind of different to the Melbourne bounce we’ve been putting out in the past and that we’re working on as a follow up but we thought it’d be good to put out something different and to work on something new for us in the studio.

HTF: What are your plans to keep moving up and be in leagues of the big guys?
SND: We’ve been working on some big collaborations back home which we’re not going to say too much about just yet until we finish them, but we guess the big picture is to just keep pushing our music and making sure we go out and kill it at our shows!

HTF: And finally, why should people care about Slice N Dice?
SND: You shouldn’t!! We’re actually terrible hahaha nah but in all seriousness we love what we do and we’re fully committed to making sure every show and every track leaves you wanting more! Oh and we’re also super mega nice guys! hahaha

HTF: Thanks guys and we wish you all the best!
SND: Thanks!Ã¢â‚¬¨ Much love Ã¢â‚¬¨SND

For more information on Slice n Dice, visit their website: We Are Slice N Dice.com and take a listen to their newest release; Inferno below: