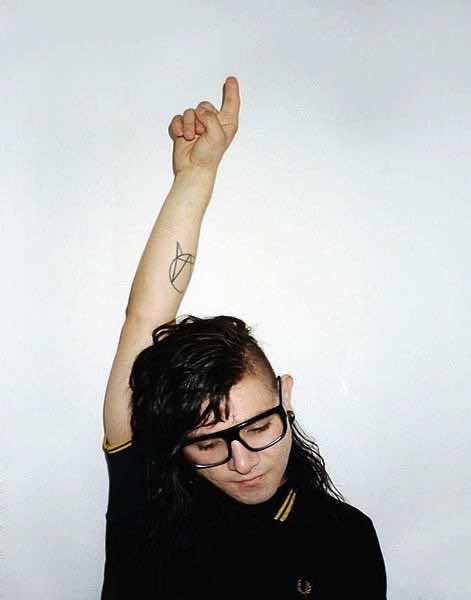 EDM spearheader Skrillex has stated that he would like to work with British rock quartet Kasabian – “if it was a natural vibe“.

Skrillex, headlined last night on The Other Stage at Glastonbury Festival. He also revealed that will be playing no less than three sets this year, in addition to the two after his 10:30 pm headline slot. Worked on by members of the team behind Glastonbury’s Block 9 area, Skrillex will be performing in a new version of his trademark spaceship.

At an backstage interview with NME at Glastonbury, Skrillex spoke and shared his views on Metallica by saying :
“I definitely want to see Metallica – they’re going to fucking kill it,” he said. “What do you think? It’s Metallica. Between the times I’ve played with Metallica and even when I was young, just seeing them, they’re so good live. The crowds are always crazy and they’re so cool.”

After making his Glastonbury Festival debut in 2013, he stated that he was to play only one date but after having the weekend off, he ended up staying the whole weekend. Festivals are his favourite time of the year, but says that Glastonbury has a special place in his heart.

Jack U, Skrillex‘s project with Major Lazer frontman Diplo, will also be released soon, he further comments: “People think my music is already obnoxious. Our music together is crazy – but it goes off.”