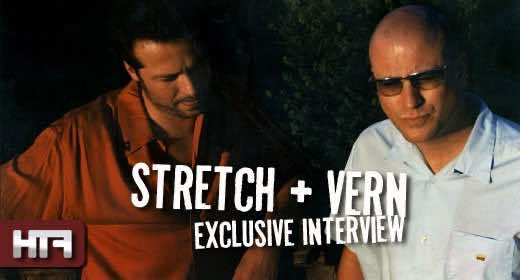 Stuart ‘Stretch’ Silvester & Julian ‘Vern’ Peake have been producing and playing house music for nearly two decades. They are probably best known for a track they released in 1996 called ‘I’m Alive‘ which sampled the piano riff from the 70’s disco track ‘Boogie Wonderland‘ by Earth, Wind and Fire. The single was a worldwide hit, placing high in many countries official charts and has featured in hundreds of dance music compilation albums since then. The track was even re-released in 2010 on an EP with several remixes including one by Stretch & Vern


HTF: So, how did Stretch & Vern meet each other?
S&V: We used to work in shops next door to each other in London’s Covent Garden. We
became good friends, and used to hang out in the same record shops in Soho.

HTF: A lot of the HTF staff are lucky to be old enough (or young enough!?) to remember when “I’m Alive” was originally released, climbing to the No.6 spot in the UK singles chart back in 1996. What have you guys been up to for the last 15 years since this rise to fame?
S&V: After the success of ‘I’m Alive’ we toured the world DJ’ing for the next 5 years. We also released follow ups on FFRR, then we signed to Virgin Records and released two singles with them. We have remixed countless acts including Pulp, Robbie Williams, Westbam, Spice Girls Simply Red & St.Etienne. We have also had many projects under different names, ColourSound, Reflekt are two notable examples.

HTF: Being signed to a record label as renowned as The Ministry of Sound is a pretty impressive achievement. How long have you been with the Ministry of Sound and where on the globe has this taken you?
S&V: From London to Ibiza, Manchester to Miami & Berlin to Brisbane etc etc. The passport is full shall we say? We have been with MOS since January 2011. We are now on more compilations than first time around!

HTF: How does producing music on 2011 technology compare to production on the hardware available in the 1990’s, and do you still use oldskool methods?
S&V: Things are most definitely different. We still have the same analogue synths we have always used in the studio. Namely the Roland SH 101, Juno 60/106, TB 303 and Minimoog. They still sound as good as they ever did. Obviously now we have a very powerful Apple Mac based DAW running LIVE & LOGIC. We like to mix up samples with softsynths along with our analogue gear to get our sound. We still own the old Akai S3000XL we used to sample on in 1996 but it’s not plugged in anymore.

HTF: What artists do you listen to and take inspiration from in house or other genres of music?
S&V: We are particularly inspired by Kitsune, Ed Banger, alot of the Nu Disco scene which is reflected in our DJ Sets. We are back to our roots which is disco which obviously is massive at the moment.

HTF: Are there any other acts that you met when you were first starting out in the DJing game who you have stayed in regular contact with?
S&V: Via facebook we are getting contacted by all the people we have met along the way. One particular friend we have lost contact with is Westbam. We DJ’d two Mayday festivals and a Love Parade with Max (Westbam) as well as some studio work. Would love to hook up with him again. Can you guys make this happen?

HTF: Stuart, we spotted you are sporting some facial hair in your current PR photos. Have you always worn a beard or is this something you feel you have now earned the right to over a 16 year career?
S: It’s taken me that long to grow it!!

HTF: Which of your remixes of other artist’s tunes have most enjoyed making and which remix of your tracks have you liked the most?
S&V: Hard one to answer….we remixed ‘Stop’ by the Spice Girls (a long time ago now). We got a message from Fatboy Slim telling us he had played our remix at the famous ‘END’ club in London, when the crowd was jumping, he held the sleeve aloft to let the cool clubbers know they were dancing along to the Spice Girls!

HTF: Do either of you have any other hobbies or interests besides music?
S&V: We are both mad on football (which isn’t easy being an England fan 😉 ) but music takes up all our time, which is fine by us.

HTF: Finally, Where can we expect to hear you playing in the future, do you have any residencies or any festivals lined up?
S&V: This year we have been working on a Stretch & Vern live set that encorporates more than just two cdj’s and a mixer. We have nearly finished putting togetherthe final touches to the set, look out for dates soon!