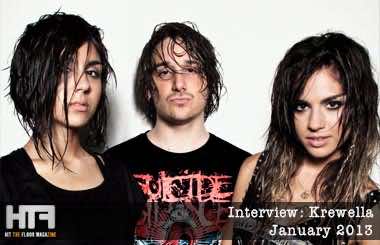 In between a hectic worldwide tour schedule and putting out their Remix EP ‘Play Harder’, we speak to Chicago Electro trio Krewella. Made up of sisters Jahan and Yasmine Yousaf alongside friend Kris “Rainman” Trindl  HTF find out about their set up, who’s the most party and the creative process that goes into the Krewella Sound.

HTF: So Jahan and Yasmine you are sisters, but how did you meet producer Rain Man & then decide to form Krewella?
K: When Jahan and Kris were in high school, J would go to his metal shows. They became friends through that scene and began making music together as a drunken hobby. When they started taking it more seriously, Yasmine randomly joined in on a studio session and the three of us never looked back 🙂

HTF: What part does each of you play in the process of making a track?
K: In a very generic sense, Kris produces the track and Jahan & Yasmine write and sing the song. In the end it becomes a hugely collaborative process, though; Kris chimes in to tweak melodies, lyrics, and structure. He has a totally different perspective on songwriter being a producer. Kris comes to Jahan & Yasmine with the tracks in their early stages and they give feedback and ideas. Everyone’s hands are in every part of every track.

HTF: How long was your debut EP ‘Play Hard’ in the making?
K: As early back as late summer 2011 (it wasn’t released until June 2012). Our song ‘One Minute’ was finished and released in September 2011 and the other tracks came slowly afterwards. It was a long process but we absolutely couldn’t release the project until it felt right.

HTF: You’re just about to drop ‘Play Harder’ which is an eight-track remix EP of some of the tunes from ‘Play Hard’. The artists you’ve got on the remixes are from all corners of the world. How did you decide on who you wanted to work with?
K: It was just released this morning! We’re really excited about all the remixes on the package because they’re all so different. We knew we wanted to work with a few, such as our friend Killagraham and our dudes from France, Dirtyphonics. The others came from really scouring the internet for lesser known but incredibly amazing artists. The EP is meant to give another take on some of the songs from Play Hard, but also showcase different and more unchartered types of music to introduce people to something new. There’s everything from DnB to moombahcore to chillstep on this EP. There’s a taste of just about everything.

HTF: Your sound is described as ‘vocally driven electronic’ with ‘aggressive dubstep-infused production’. Is this just a hybrid of all of your styles, or is it more complicated than that?
K: Putting three different people together into a group can be really hard at times when trying to form a sound, so yes, it’s definitely more complicated than that. For instance, Kris was deeply embedded within the Chicago metal scene for years. Yasmine was in an indie rock band before Krewella. Jahan had always taken choir and was interested in bands such as Tool and A Perfect Circle. We all had a love for certain groups such as The Faint, Chromeo, & Justice, though, and through that electronic love and the blending of our own personal styles, Krewella’s sound was birthed.

HTF: You opened for Dj Fresh earlier this year at Koko, how did that come about?
K: We have the same international booking agent and that was the initial way it came about. To be honest, though, the mix was great. We opened, then the lovely Rita Ora played, then Fresh. It was a really good sampler show of all types of genres of music.

HTF: You’ve just finished your 2 week stint at Stereosonic in Australia, how was that for you & what did you think of the Oz crowd?
K: One word, AMAZING. The three of us completely fell in love with Australia. The people, the land, the epicness of the festival itself. The festival-goers and participants at the Bass Stage (what we played at Stereosonic) were so open-minded to so many different styles of music and we really appreciate that. Can’t wait to go back.

HTF: You’ve been non stop touring for a while now, has this taken a toll on your relationship as a band?
K: It’s definitely hard to spend constant time with two other people that you’re also creatively working with. To be honest, we fight a shit load but manage to get through it. The fact that Yasmine and Jahan are sisters also helps a lot.

HTF: You played two shows on NYE which is pretty hardcore, but who’s the most party out of all of you?
K: Definitely no doubt about it– Kris.

HTF: What are your new years resolutions for 2013 & what kind of year do you hope to have?
K: Resolutions are made to be broken. Trying to have a year full of cats, sweaty raging shows, and a full length album that we are extremely proud of, just to name a few things.