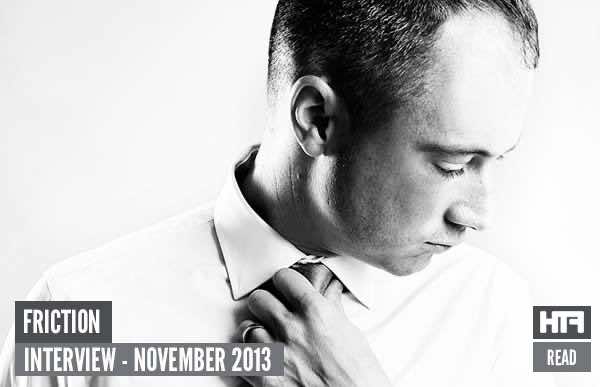 Today we catch up with the DJ at the forefront of Radio 1’s flagship Drum and Bass show, Friction.

Well established on the scene, Friction has played at some of the world’s biggest festivals and has won many awards, including the D&B Hall of Fame at the 2011 D&B Arena Awards.

Ahead of his new single release “Long Gone Memory” and his album next year, we find out a little more about the man himself.

You can check out more from Friction here – https://www.facebook.com/frictiondeejay

HTF: You were raised in Brighton, how would you describe the DnB sound there?

F: It’s always been great. For me it was the first place that exposed me to that type of music.

HTF: This year saw you collaborate with Skream to create Kingpin. What was it like working with him?

F: It was great working with Ollie. We wrote three or four ideas, but we felt Kingpin was the best. We’d wanted to work together for a while so it was great to finally do it.

HTF: Are there any other artists you’d want to work with?

F: Absolutely, there are loads. It’s often really difficult to fit them in though. Everybody’s really busy.

HTF: Who are your idols when it comes to mixing?

F: It would have to be Randall. DJ Zinc also, love him.

HTF: Being a multi- award-winning artist you’ve played all over the world. What’s your ultimate dream?

F: My ultimate dream would probably be to own a big house in the Maldives. Being serious though, putting my first album out is something that I’m really excited about. That’s a dream for me.

HTF: What’s the story behind your show at Radio 1? How did you get there?

F: I was about to get on a flight to Tokyo when my manager called me to let me know they were interested. I thought it was a wind up at first, but we sorted it out as soon as I was back in the country.

HTF: Traditionally you have been committed to vinyl as a form of art. When did you move to digital and why?

F: I moved to digital after a gig in Las Vegas where I turned up with all my vinyl. The decks kept skipping so it was a nightmare of a gig. At that moment I gave up on the vinyl thing.

HTF: What do you think the future of drum and bass holds and does it excite you?

F: Drum and Bass always excites me. Unlike other genres that seem to flit in and out of the public’s consciousness, Drum and Bass is always there.

HTF: What are your production plans for the future?

F: My new single Long Gone Memory is what’s happening at the moment. My album will be out next year some time.

You can check out Long Gone Memory, a special delivery from B.Traits here (track begins at 5:10):

In this article:drum and bass, Friction, interview