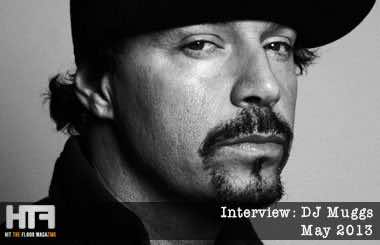 As the DJ and producer of one of the world’s biggest Hip Hop acts, DJ Muggs of Cypress Hill is a man of legendary status. With his last studio album ‘Dust’ coming out in 2003 it’s been a long time waiting for the follow up and his new album ‘Bass In Your Face’ has finally reached us with a brand new sound.

Drawing upon more electronic influences, Muggs ventures into the world of dubstep, trap and grime to bring us a whole new string to his bow and we thought it’s only best to get on the phone to the man himself and find out more about this exciting new album.

We discuss how he adapted to the digital world, working with grime artist Dizzee Rascal on the album and find out what his weed of choice is!

Bass In Your Face is out now and you can check out more from DJ Muggs at https://www.facebook.com/DJMUGGS.OG

HTF: So ‘Bass In Your Face’ has come out this Monday in the UK. You pretty happy about that?
DM: Yeh I’m happy. It’s been done for a while, I finished it last July, so it’s good to see it out in the UK finally. It came out in America in January.

HTF: With it being finished for so long, are you bored of it already?
DM: Oh I’m so bored of it I’ve already recorded the next EP but I gotta slow down a little bit *laughs*

HTF: How did you find the whole transition to digital as a hip hop artist?
DM: For a long time things started changing into digital. There was one group who were like “We gotta keep it analog” and there was the digital world that was like “This shit’s much easier, you can do everything you can do analog. Everything is in a box”. I had one foot in pretty much both sides and kept making my records and just using the work station as a recording device. But, as time went on and I was checking out different plugins, I slowly started to progress to the digital side, just because it’s so convenient man and I can make my hip-hop shit sound grimy in that workstation so it’s not really a big problem for me. A couple things I had to sit back and learn over time, and I took a few months to just learn this and learn a few things I never really used, like production techniques, for the most part it was just like anything, just apply yourself and you’ll figure it out.

HTF: Did you take much influence from working with Rusko on Cypress x Rusko?
DM: A little bit. I’ve definitely always been a Rusko fan since his early stuff. I just got done doing a few shows with him as well. Yeh, he’s definitely an inspiration both with his live sets and his music.

HTF: It was nice to see amongst the dub step and trap, that you went a bit grime in there with the addition of Dizzee Rascal on ‘Snap Your Neck Back’. What are people’s opinions of grime in the U.S? It hasn’t ever taken off in a big way it seems.
DM: It’s in pockets man. A lot of the forward thinking music people that are constantly searching for different things they play it, I hear it and then the more mainstream, they don’t care, they don’t wanna know about it. It’s those real music kids that play it out in their sets. I’m always looking for new grime to play and mix in cus in some of these underground spots you get the pockets.

HTF: How did you get to work with Dizzee?
DM: Bun B is a good friend of mine and we do the Gumball Rally every year together. Dizzee was in L.A talking to Bun saying “Yo, I wanna get in the studio in L.A. who you know?” and Bun’s like “Ah, you need to go see Muggs”. So Dizzee came in and recorded a few joints and then he was like “What are you working on?” and I played him some stuff from the new album and he heard this track which for me was like an 80’s, west-coast throwback type sound mixed in with digital sounds, I call it futuristic old-skool. Dizzee heard it and said “Yo, I wanna jump on that record” and I was like “That’s the single. We’re putting that record out in a couple weeks” he said “That’s cool, but I wanna get on that record”. You don’t tell Dizzee Rascal no. I was happy as hell man, I’m a fan.

HTF: What other grime artists are you a fan of?
DM: Wiley, Killa P he’s on this record and I like P-Money a lot.

HTF: You’ve been touring the new album in the U.S recently, are we going to get a U.K visit soon?
DM: We wanted to wait until the album was released before we started booking shows, so I’ll probably come in August.

HTF: What can people expect from the show?
DM: A lot of imaging. I bring turntable skills, I was a battle DJ in the DMC competitions so I bring a little bit of that, I like to entertain. All kinds of music; dubstep, trap or a bit of drum and bass, some hip-hop songs. I’ll look and see the reaction of the songs and maybe play two more and if the reaction ain’t good I get out of it real quick. My sets are pretty much live like that. It’s 90% on the fly.

HTF: So people can go to more than one show and get a different show every time?
DM: Yeh if I come back to your city I’m trying to not even play the same records.

HTF: We got a few fan questions for you. Do you still smoke much weed and what is the best you have smoked?
DM: The Cali weed is the best, the Cali Kush. I pretty much only smoke when I’m in the studio working. That’s the time I enjoy smoking cus I get inspired and wanna sit and make music all day.

HTF: What’s your favourite Cypress Hill track you have worked on?
DM: Wow! I don’t think I have one. I do enjoy ‘How I Could Just Kill A Man’

HTF: “When the ship goes down you better be ready!” – What happens when it does?
DM: The ship’s going down! Whether it’s a war, whether it’s chaos, you gotta be ready, you gotta be prepared. Be ready, always keep one eye open. Don’t be taken by surprise.

HTF: Any last messages?
DM: I just dropped another project that is 100% different to this one. Check it out, it’s called ‘Cross My Heart Hope To Die’ – CMHHTD.com – . It’s something I’ve been working on for two years. It’s a multimedia project and came out on a label called Alpha Pup out of L.A. about 3-4 weeks ago. Check that out man it’s something different. I did a record before called ‘Dust’ and it’s more in the line of that kinda music.

HTF: Thanks for taking the time to talk to us. It’s been a real pleasure and hopefully we will see you in August.
DM: Thank you for your time too brother. Appreciate it man. Take care. Peace!