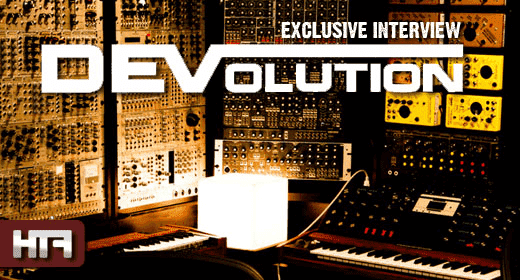 DEVolution consists of Artful Dodger founder Pete Devereux and former Size Records artist Tom Devos; they will release their debut single ‘Good Love’ on September 12th on One More Tune / Warner Bros Records. With this is in mind HTF wanted to hit up this two man masterpiece as the hype for their debut release of their new record grew.

Read our exclusive interview here below..

HTF: DEVolution, we want to firstly thank you for chatting with us, we are very excited for release of ‘Good Love’ later next month, as well as hearing more from you guys! Are you stoked for the debut release?

Hey, it goes both ways; thanks for having us! Yeah we are completely made up ‘Good Love’ is getting a full release. It’s been a year in the making with a few twists and turns along the way, so it’s satisfying to see things picking up traction on a daily basis.

HTF: The single features the vocals from Amy Pearson how did this come about?

Our manager has been aware of Amy for some time, and he fired her a couple of our backing tracks last year. We got the call saying she had a couple of ideas and could we meet centrally in London one day to get them down (we are in Southampton, Amy was in her home town of Birmingham at the time.) Chris Baker from Mint Royale very kindly lent us his studio for the day and the first version of ‘Good Love’ was recorded.

HTF: Can you tell us of other potential featured vocals we can look forward to in future tracks?

We’d love to say Nas, Missy Elliott & Justin Timberlake, but there is nothing in the pipeline yet! We are just getting some ideas together for future records so we’ll see what happens.

HTF: So what can we expect from DEVolution in the future?

Well, we are currently putting together a new EP due to drop just after the single, and we have a live session coming up which requires a lot of planning and rehearsing. We would love to get out on the road later this year and play a few clubs too.

HTF: When we listened to you material we heard clever creative twists through some perhaps garage vibes and with a twist of some sexy dubstep parts, we can really feel and hear the passion from each of your individualistic and extremely talented music styles. Would you say you could define DEVolution to just one genre? Or has this been a new learning curve and progression in music making for you both?

Genre can often get in the way of creativity, so we are keen not to be tied to any one in particular. Our influences are broad and we embrace everything from our classical backgrounds; (Pete is a Pianist, Tom a Percussianist) 80’s/90’s Dance, Rock & Metal (The Clash & Metallica being our favourite bands respectively), UKG (obviously given Pete’s past) right through to current Dubstep, Drum & Bass, & Moombahton styles. Tom has always been a lover of electronic music in general with early memories of listening to Tomita, growing up with an electric organ in the house and programming his first music on a ZX Spectrum computer.

HTF: Do you feel DEVolution is a new musical breath of fresh air? Even though you have both been doing this for a while now.

Absolutely. We had both been working on various projects for the years previous to hooking up with not much success and the first year working together we were very much focused on House music. In fact the early version of ‘Good Love’ was a House record, but we just couldn’t get it right. It was a very frustrating time looking back and then one day we had that Eureka moment where we flipped it into Dubstep territory and within twenty minutes we could see it was going to work.

HTF: Your Facebook page provides a full 29 minute mixtape – Incredible!! When can we expect to start our DEVolution EP collection!!?

Damn! Is it only 29 minutes? It was supposed to be 30! We have had a lot of love for that mix to be fair, and it is a pretty good snapshot of where we are both musically and what you can expect to hear from us when we hit the road. We have another mix planned for September and as we said earlier a fresh EP is due about then too.

HTF: It has to be said that you are both true music making geniuses. Is music making and performing still as fulfilling as it started out for you both?

For sure. I don’t think you ever lose that buzz, and if you do then you stop. It’s the reason U2 still tour the world and Madonna keeps making records. It’s beyond money. One of the things we are really looking forward to is playing live and DJing.

HTF: Do you feel that every day is still a day to learn and progress and do you still get excited to make material as much as you did the first day you begun too?

You have to look forward, always. You make a record and as good or bad as it is, tomorrow is all about the next record; and you always want the next record to be better than the previous one. The bar has been raised so many times through the years as the making and recording of music is far more affordable and accessible. The beginning of a new record is always the really exciting part. New ideas, new ways of doing things and it’s a special feeling when you’ve got a few simple ideas locked down and you know it’s going to work. ‘Good Love’ was sketched out in an hour and we were bouncing off the walls knowing it was going to work.

HTF: You come from the biggest music experiences, as well as producing, setting genres yourselves and selling some of the biggest tunes worldwide. What do you feel DEVolution will bring to the table?

We have both been doing this for a long time, and the small team around us have been doing it even longer, so we would like to think there is a bit of experience and knowledge in there somewhere.
Bottom line is it’s about making big records, and whether you’ve been in the game 20 years or it’s your first week – anybody can write one. The biggest challenge facing any Producer / Songwriter in the modern world is getting your track off the hardrive and out into the world for people to hear. So in that sense we are blessed having OMT / Warner Bros on side, so as long as we keep the records coming they will get them out there.

HTF: What has been your most enjoyable experience so far as to becoming DEVolution?

Without doubt MistaJam playing ‘Good Love’ for the first time on his 1Xtra show was a real buzz. He then selected it to be his ‘Jam Hot’ Record of the Week during 1Xtra Dubstep Week and we were invited to 1Xtra Towers to record an interview with him for broadcast. The whole experience was fantastic (it felt like a chat with an old friend as we have spent a lot of time listening to Jam’s show and when we met him in the flesh he was exactly the same as he is on the radio!) and really kick-started everything for us.

HTF: You obviously have both had some absolute epic experiences over the years, is there anything in particular that has stood out to you both the most?

Pete – Winning an Ivor Novello, performing on Jools Holland and playing at Glastonbury for Radio 1.
Tom – Working on an album with Sebastian Ingrosso & Steve Angello was a buzz and also playing live in Ibiza on a stage in the sea as the sun set behind me was certainly a highlight in my life.

HTF: Is there an experience in the music life that you both still are yet wanting to be fulfilled?

We both get a real kick out of hearing our records on the radio and seeing people’s YouTube comments, so more of that please! Other than that we both have a desire to take this live and also tear up a few clubs.

HTF: So now you have pounced out from the underground, and for those that were not aware of this new amazing creation now are, where can we all catch DEVolution next?

Well the single drops on 12th September and we will be immediately following that with an EP, so keep your eyes glued to http://wearedevolution for further info!

Thankyou so much for taking time to speak to HTF. We are so excited about this!! And we hope to catchup in the near future ! We Can Feel The Buzz. Much Love and Respect, xx

You can watch the official video for the new DEVolution single here below..

Known across the land as the loudest women on earth, Steph heads up HTF's Rock/Metal content. More excitable than a puppy on acid! Has a weird obsession with Peter Andre.