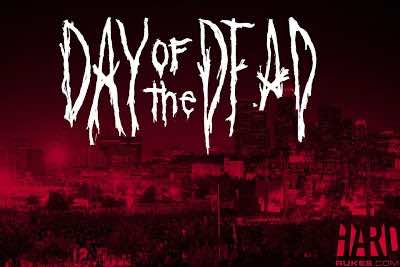 Have you ever wondered what would happen if the LA’s HARD Day Of The Dead festival failed to include The Gaslamp Killer on their fabled line up? Well according to HDOTD HQ..THIS WOULD HAPPEN:

So basically yeah, The Gaslamp Killer, kills everyone, and like a crazed CSI finale, all the famous faces get drawn in. One of the Jackbeats guys gets interrogated, Deadmau5 ends up snout-down-tail-up in a pool, even brit boys Calvin Harris and Skream meet an untimely end. I’ll be honest by about 4 minutes in it all gets a bit much and starts to verge on The Mighty Boosh, but credit where credit’s due – for a festival promo video, it’s pretty good. Maybe Creamfields will do a Love Actually style promo, where Eric Prydz and David Guetta realise that they’re actually meant to be, but I doubt that somehow.

The festival itself, with a suitably Halloween theme, will be taking place on the 2nd and 3rd of November at State Historic Park. Artists include Skrillex, Skream, The Bloody Beetroots, Nero and of course cheeky little murderous Gaslamp Killer.