On the 29th June, something very unexpected happened on a certain social media page. An unexpected blip of online activity in the form of a picture, which sent a lot of people in to overdrive. This was the picture in question… 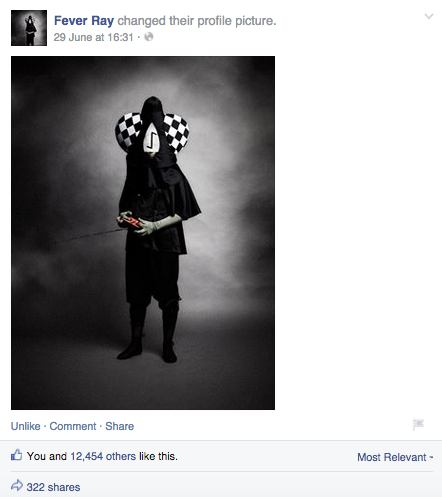 Now let me bring you up to speed, because this is a massive deal for the world of alternative and electronic music… WE NEED TO TALK ABOUT FEVER RAY!!!

I know there are some of you out there who will be like “Who the hell is Fever Ray?“, but to those of you in the know, I am sure that you share the same level of potential excitement and enthusiasm as I do. But, for the sake of answering the aforementioned rhetorical question, let me digress a little bit.

Fever Ray – a.k.a. Karin Dreijer Andersson (also one half of the extremely influential electronic duo The Knife, who recently called it a day) is regarded as one of the most enigmatic and innovative electronic artists since the likes of Bjork. Her self-titled debut album which was released digitally in January 2009, was one of the most critically lauded albums of that year. Such accolades also saw it reach many critics ‘best of’ end of year lists – many of which she landed the number one spot. Fever Ray’s debut album also won numerous awards including the P3 Guld award for ‘Dance Artist Of The Year’, and a Manifestgalan for ‘Best Live Artist’. She also received various nominations from various Swedish music awards, as well as a coveted nomination for the Beatport Music Awards for ‘Best Electronica Artist’. You may also recognise some of her music from the television series Vikings.

Her debut album was in equal parts dark, brooding, soulful, enigmatic, atmospheric, glacial, surreal, and borderline eccentric genius. Musically recalling influences from the likes of Portishead, Bjork, and even Nick Cave & The Bad Seeds (which she did a haunting cover of ‘Stranger Than Kindness’), mixed with the fantasy and almost paranormally evoking lyrics and visuals, she totally upturned the electronic music world on its head and left it wondering what they had just listened to. Additionally, the musicianship and production on this album are nothing short of works of art – art being the word that should be emphasised here.

Whilst the music is something to behold, another vast talking point was Fever Ray’s appearance. Like a true artist, her on stage appearance – as well as in promotional pictures – made everyone pay attention whilst looking in awe. A mixture of creepy masks, almost druid like alternative garments and dresses, mixed with some ghostly make up that almost personifies the mystical darker heart of Scandinavian culture and folkore, made for an almost intimidating yet breathtaking piece of viewing. When you combine both musical and theatric elements together as well as some very atmospheric stage production, you are left with ‘the full package’. Something of such tenacity in every department, that a live performance would be more so a work of art than it would just a normal concert.

After many successful tours and festival appearances worldwide including a residency at Brixton Academy in London, as well as two UK festival appearances – Bestival and Electric Picnic, Fever Ray then went off radar in 2011 due to other commitments with The Knife, etc. But there was no activity whatsoever over these years. Absolutely nothing. No news or any sign of life in regards to what the future of Fever Ray may hold… all went quiet. Until a couple of days ago…

Now granted the said picture has been indicated to be an older promotional picture of Fever Ray, but looking back at the social media profile, this is the first bit of new profile picture activity since July 2012. And since the conclusion of The Knife’s last ever tour, this does mean that Karen now has a free schedule – allowing more than enough time to invest in her solo work. So what the hell does this all mean?!

Now in this day and age, media hype and social media speculation tends to make everyone jump to conclusions at the best of occasions, but this recent change in picture has led to a lot of sudden excitement. Could we finally be seeing the eagerly awaited return of one of electronic music’s most innovative artists? Could we finally be on the verge of Fever Ray’s sophomore album? Maybe 2015 could potentially see some exclusive shows from the dark yet mysterious temptress? Or are we merely but over-speculating over the slightest little change, that could potentially mean absolutely nothing?

Whatever the case may be, what is known is that there is still a strong and hungry audience waiting to hear the next chapter in the legacy of Fever Ray. It is 2015 and whilst there are some incredible, current electronic artists still leading the charge for innovative music, such as Bjork, Shield Patterns, FKA Twigs, The Gaslamp Killer, and Squarepusher, there is a mysterious silhouette of where Fever Ray once stood that is still missing… but in a current time where electronic music is littered and saturated with soulless, tacky, formulaic, an insubstantial drivel, this is merely but the perfect time for the darkness to loom over the monotony that currently resides.

Fever Ray – 2015. May the darkness and the mystery cast over once more, and enchant the hearts, minds, and souls of your fans, and the general public all over again. We need you now more than ever!