Nine years in and Boomtown Fair has quickly become one of the UK’s must-attend-festivals. Therefore, I felt it was finally time to visit the famous pop-up town for myself.

I’d heard Boomtown mentioned many times in the past, and for many different reasons; mainly people describing Boomtown as a fun festival, but unfortunately one with a severe drug problem. It wasn’t until I spoke to people about Boomtown at Glastonbury Festival 2016 – where I was working on a liquorice stand – that I heard the claim that Boomtown is now actually ‘better’ than Glasto itself! After listening to this bold statement, I made it a priority to attend 2017’s Boomtown Fair and unbiasedly see what all the fuss was about. 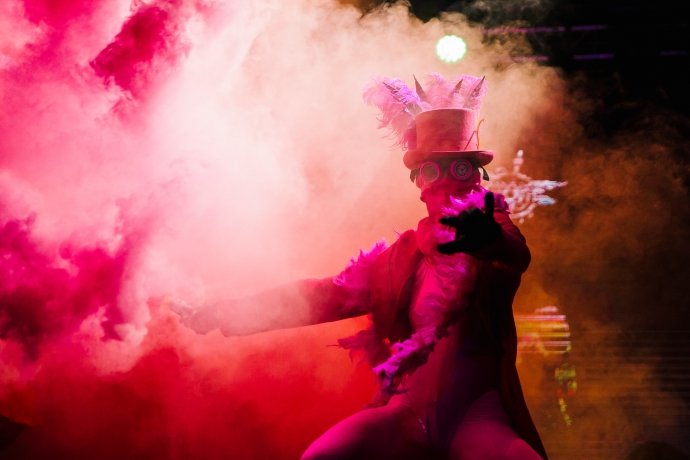 After being bleeped into the festival, I could instantly feel the energy growing and hear the pumping bass coming from inside the woods. Within minutes of arriving, we had our first encounter with a Boomtown-goer. This young lady started our brief conversation with the opener: “Have you got any mushroom?” and I apologised for not having any ‘fun guys.’ “Ah, fuck” she replied, “all my mates have them except me, the little bastards. Oh well, thank you for your time.” What a polite person I thought; but it didn’t exactly help with my perception of Boomtown’s infamous reputation. With this conversation being so early into the festival, it seemed I could just be walking into a ‘Let’s get fucked fest.’

Luckily though, at the front of the longest queue of the festival, was a tent packed with festival-goers who were each receiving a drug test; or shall we say, testing their drugs. Here, a fantastic organisation called The Loop would check the drugs that attendees had purchased to see what they were consuming. Their trained councilors were able to speak to people as equals and keep these people safe from overdosing, or even worse. This approach worked as a progressive way to handle drug consumption at a music festival. And while the people at The Loop certainly deserve credit for their hard work over the weekend, the organisers at Boomtown themselves also deserve acknowledgment for seeing a problem and positively trying to solve it. 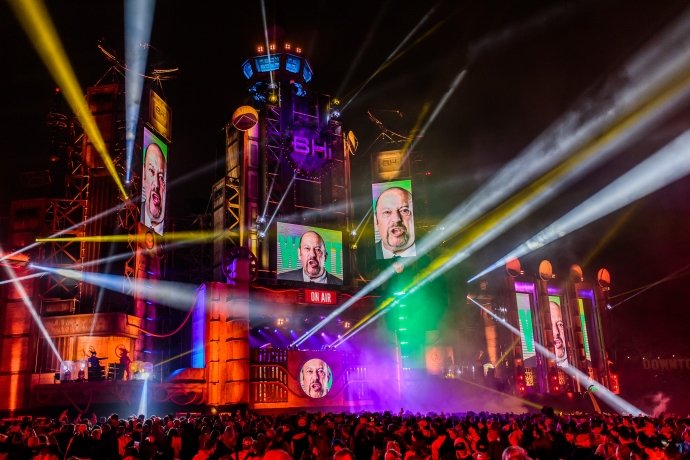 Now aside from this, it was ultimately the festival’s production that blew my mind. At first, you’re swept away by the size of some of the stages and the flames bursting from the famous Lions Den or Sector 6, but the more you explore, the more you’ll admire this festival’s attention to the finer details. Districts with particular themes neighboured one another and filled their streets with actors or secret rooms. The nearest comparison would be Glastonbury’s Shangri-La, but imagine that creative style as an entire festival. 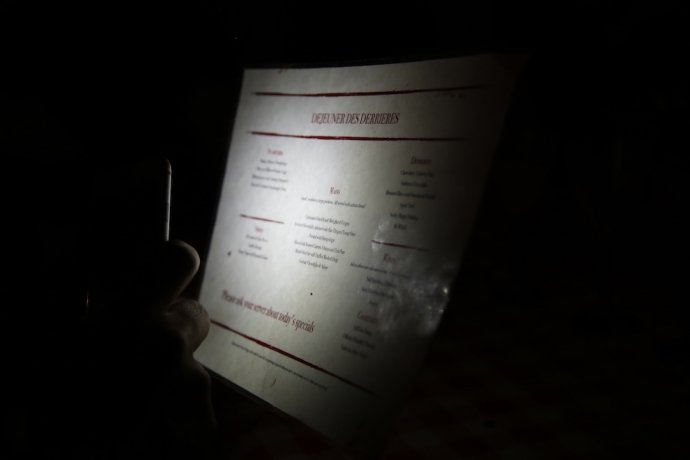 One highlight was when we stopped off at The Ballroom, just inside Mayfair, to see our friend DJ Chris Tofu. It didn’t take long until he dragged us across the foot path to what looked like a restaurant called, Dejeuner Des Derrieries. After showing us to our seats, the waiter introduced us to a flamboyant, wealthy woman who proceeded to throw Boomtown money in the air. We skimmed through the menu and noticed the choices had a common theme: shit. This shit-pun menu left us asking the waiter for his recommendation. In response, he yelled to a person above and put the plate next to a tube above him. Out dropped what looked like shit, human shit! As you can imagine, our response was a mixture of shock, disbelief, and hysterical laughter. 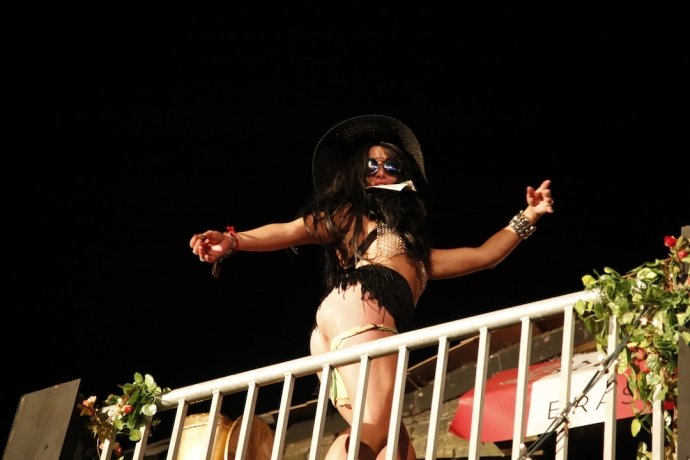 It wasn’t until we got up and left that we saw a crowd of shocked people staring above the restaurant. We strolled out to find a woman sitting on a toilet and shitting down the funnel onto the plates below. Then, to entertain the crowd, the bottom-half naked woman then rested her rear on the edge of the platform and started to throw fake-shit at the people walking past. This bizarre act was one of the funniest things I’d seen all year, and the faces of the scatty kids walking past only added to the laughter. The disbelief of what they saw was probably more entertaining to watch than the woman fake-shitting everywhere. 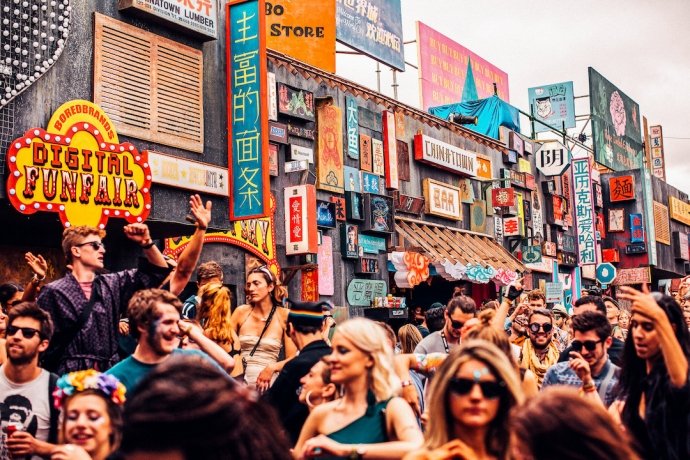 It’s not fair to directly compare Boomtown and Glastonbury as the sheer size of Glastonbury alone makes it hard to compare to Boomtowns intimacy. The main difference is how they use their budget. Boomtown seems to spend their money on production, where as Glastonbury pays more out for the lineup. As a result, there’s a more consistent attention to detail at Boomtown, but naturally, they can then only afford a more underground music scene rather than back to back big names. Realistically, production wise, Boomtown is probably the closest the UK has to Tomorrowland, but with a raw, underground feel that’s more authentic and personal, rather than commercialised. 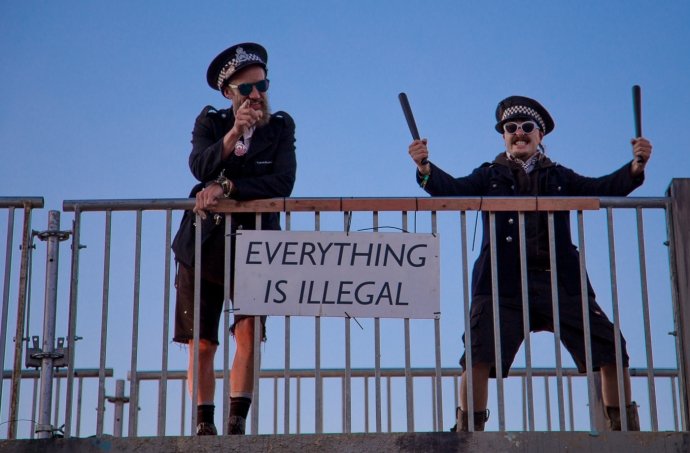 After hearing so many mixed reviews of Boomtown in the past, I didn’t know what to expect. But, after spending all day walking through the stages and campsites, I felt Boomtown’s ‘drug problem’ had been pretty generalised. No one could say this festival is any worse than the next festival. I’ve seen and heard just as bad things in the campsite at Boardmasters. In fact, I admired that Boomtown had taken such a mature approach to the drug culture at festivals.

Boomtown is leading in a lot of areas that others are failing. The story, attention to detail and sheer size of some of the stages are simply incredible. It’s a formula that’s working, and as they grow every year, the production and shock factor will be even more spectacular.