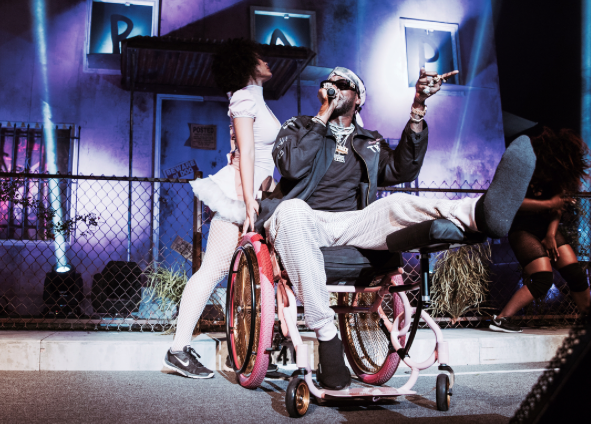 2 Chainz is still touring despite breaking his leg over a week ago.

People would have exacted the world to achieve a lot of things by the year 2017. Some imagined flying cars, others dreamed about time travel. What we have instead is something better than your wildest fantasies: 2 Chainz performing from a vibrant pink wheelchair. A sentence that nobody would have dreamed of reading.

It all started after Tity Boi broke his leg and received over a week ago. After a successful procedure, the doctor recommended that Atlantain should cancel his tour and recover. Your average Joe would have planned a week’s worth of bed-bound activities, but not 2 Chainz.

As nerves fans anxiously flooded the venue in Tuscon, Arizona, they soon cheered in disbelief as a ‘nurse’ rolled 2 Chainz on stage in a pink wheelchair. With a thick black “TRAP” logo stamped on the back of the chair, it seemed to only add to the experience.

Following the performance, 2 Chainz posted on Instagram a selection of images and a caption that sums up his GOAT-ness:

So I broke my leg 11 days ago , and had surgery 10 days ago .. when I woke up from sedation the doctor told me ” well looks like your gonna have to cancel your tour ” so I told him maybe it means God wants me to use my mind and be creative ! So after all the morphine and pains meds wore off I called management and said somebody find me a ” pink wheelchair ” I can’t let my fans down besides I’m passionate about this shit !! Tucson, Arizona thank you for supporting me and rocking with the campaign !! Show was legend !! If you look up resilient in the Webster dictionary it’s gone be a picture of me rocking a fucking show in a pink wheelchair !! Remember never let anyone or anything get in the way of you being great ! If I can do it you can too ??

Talking of 2 Chainz breaking his bones, have you ever wondered how many chains it would take to break his neck?

In this article:2 Chainz