Is Futurama About To Make An Unexpected Return?

Game Of Thrones Season 6: What To Expect | SPOILERS

Could The Mighty Boosh Be Back? Let's Celebrate With Our Top 5 Boosh Clips!

There's A Tumblr Account Highlighting The Best Haircuts From Making A Murderer!

Did You Know Sir Killalot Of Robot Wars Released A Banging Dance Track Back In 2000?

BBC Three Goes Completely Online: Is This The Beginning Of The End Of Television?

Get Ready For A Bill Murray Themed Christmas

5 Reasons Why Miley Was The Worst VMA Host Ever

"Twinning" Look-alikes Of The Orange Is The New Black Cast!

Goodbye David Letterman - We Look Back At The Best Band Performances From The Show!

Kim Kardashian Gets Naked Again, But This Time In A Desert!

Jamie Oliver Teaches You How To Chop An Onion..Using Crystals! LOLZ

TV Show Endings: Nine Series' That Wrapped-Up Terribly (Or Didn't At All...)

Glee Comes To Its End - Here's The Best Song From Every Season!

Why Should Jeremy Clarkson Get Away With Punching Someone When I Can't?

Jeremy Clarkson Is Officially Dropped From Top Gear & The BBC!

Googlebox's Silent Jay Has Been Dumped! A Tribute To Our Favourite Silent Metal Head

The TENA Men Advert Is Pretty Funny - You Might Piss Yourself!

EastEnders: Jim Branning To Be Laid To Rest In Special Tribute Episode

BBC Three: Proposals Made To Keep Channel On Air

First Promo Image And Clip Of House Of Cards Season 3!

Game Of Thrones-Themed Restaurant Set To Open In London!

How Amazing Was Kelly Kapowski On Saved By The Bell? She Needs A Tribute!

Jimmy Fallon Reunites The Saved By The Bell Cast For Special Episode!

This Morning Receive Complaints Over "Bondage For Beginners" Section!

11 Reasons Why Renewing Supernatural For Season 11 Was A Bad Idea!

Immigration Street To Be Axed By Channel 4!

The Game Of Thrones Series 5 Trailer Has Leaked!

Quick Game Of Thrones Quiz Anyone?

Game Of Thrones Season 5: What We Know So Far...

Ed Sheeran To Do Lap On Top Gear - Without A Driving License!!

Watch The Awkward Interview Where Jimmy Fallon Finds Out He Could Have Dated Nicole Kidman - Hilarious!

400 People Complain About Rita Ora's Boobs On The One Show!

Well, Christmas TV Was A Disappointment Wasn't It? | Article

Yesterday, House of Cards fans were over the moon when some discovered that Netflix had accidentally uploaded the whole of season 3 more than two weeks before it’s due to be released.

People wanting to catch some now will be disappointed though, as Netflix took it down swiftly and sent out a tweet that read:

“This is Washington. There’s always a leak. All 13 episodes will launch February 27.”

Netflix users who noticed quick enough took a screengrab of the the episode descriptions and thumbnails, which are below. However, anyone who searches for it on a torrent site won’t find it, as it seems that Netflix were too quick.

Check out the screengrab of the House of Cards episode synopses here! 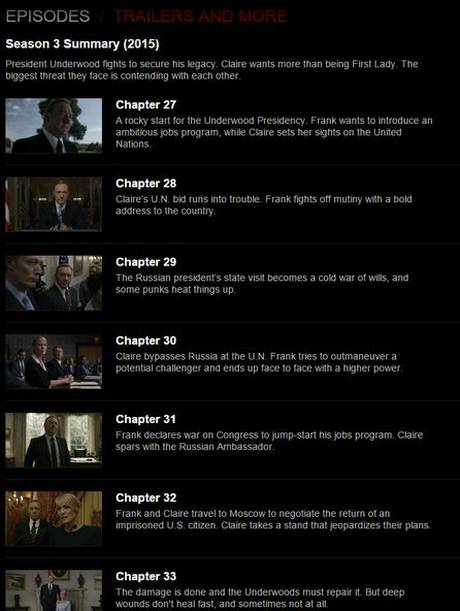 Source: Netflix
In this article:House of Cards, Netflix, Season 3, spoilers