Banana Star Luke Newberry & Writer Matthew Barry Talk About The New E4 Series! "I Am Hoping That It Reaches Out To Everyone – Gay, Straight, LGBT"
Advertisement 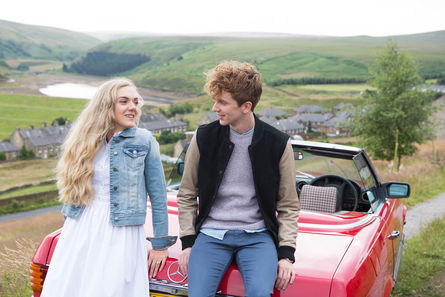 If you haven’t seen E4’s new drama Banana, it’s about time you checked it out!

Russell T Davies’ new adult drama explores the lives of 8 couples on a journey of love, heartbreak and sex. The Banana series is part of a trio of dramas’ (Banana, Tofu & Cucumber) which all interlinks and are currently been shown across three separate channels (E4, Channel 4 and online) which is quite a new and exciting concept.

Luke Newberry (In The Flesh) and writer, Matthew Barry discuss sexuality and growing up ahead of the fifth episode of Banana airing on 19th February, 10pm, E4.

Where did the inspiration for the episode come from?

Matthew: Originally when we went into see Russell he said tell the story that you want to tell. The story that I tell in Banana Episode 5 is sort of based on my own experiences of leaving Cardiff and going off to university. It’s about whether it is better to stay in the town where you grew up and have 2.4 children – there is a line in the script about mortgage, marriage and maternity – or is it better to go out and do different things, and then what’s the reality coming back. Neither is right nor wrong. Essentially it is the story of a boy that goes off to university, and comes back thinking he’s had some sort of life-altering experience. In reality all he has done is gone to university, shagged a few people and he comes back thinking he’s Stephen Fry.

Can you relate to the character?

Luke: I think everybody has experienced something similar. I moved to Drama school – which to be fair wasn’t too far away– but then you come back to your friends who you have grown up with in your local area and suddenly you’re not in the same place in your life. My character, Josh, is between the two lives and trying to reconnect with his old life. But he’s struggling to understand his friends’ mind-set at times. Josh starts to question the things that his friends are coming out with. He’s met lots of new people and got lots of new fresh perspectives on life. I think I can relate to that.

How does sexuality fit into the episode?

Matthew: For me, Josh’s sexuality does inform the piece as a whole. I think that attitudes have changed a lot in the last ten to twelve years since I was at school. But certainly when I was there in Cardiff there was no prospect of me going to the prom with a guy. Or just casually dating a guy. I think that feeling of going off to London, or Manchester, and seeing a different world where it is okay is a big driving force for Josh leaving in the first place. Sophie believes they have had the same upbringing and experiences in school, and Josh is sort of saying for the first time, ‘Well actually we didn’t, because now I can do the things that you took for granted and that’s why I went away’. It’s sort of a love story – but between two best friends who are in different stages of their journey.

What was it like working with Russell T Davies?

Matthew: Working with Russell for me was an absolute, unbelievable dream come true. I actually looked forward to notes which I don’t think you’ll ever hear another writer say. They came personally from Russell every time. His emails sound like he talks – it’s like poetry. He is there every step of the way giving the best notes and he’s just amazing really. That is my gushing done [laughs].

How do you hope audiences will respond to Banana?

Luke: I am hoping that it reaches out to everyone – gay, straight, LGBT. They are life stories for everybody to learn from and connect with. It’s not a niche series. It’s about life, love and relationships. Queer as Folk was a fantastic series and these new shows are really presenting how far people have come, and how much time has changed attitudes.

Matthew: I remember clandestinely watching Queer as Folk on my TV in my little bedroom when I was at school. As Luke says, you don’t have to be gay, straight or trans to appreciate Cucumber, Banana and Tofu because they cover universal themes – love and loss.

Banana episode 5 will be aired February 19 on E4.