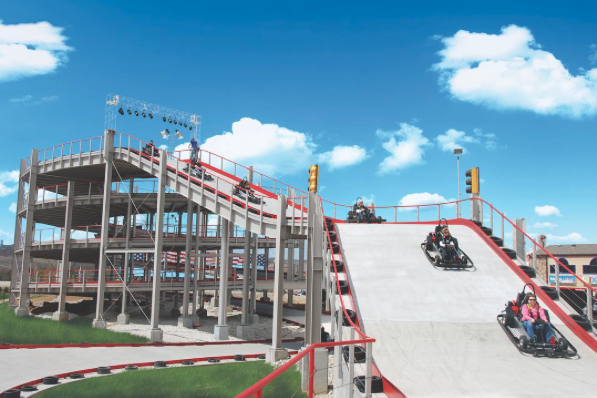 Your childhood fantasy is about to become a reality as someone is building a Nintendo Mario Kart styled racing track.

After years of playing/arguing with your friends and siblings about Nintendo’s classic game Mario Kart, you’ll now be able to go head-to-head on a real track. Currently known as the ‘Niagara Speedway,’ the new racing track attraction will soon be found in Niagara Falls, Canada.

HOCO Limited are the brains behind this fantastic idea. The privately-held tourism and resorts company started Mario-Kart-esque track back in 2015 in Clinton Hill. Also joining this new attraction in the space of ten-acres is a zombie exhibit, an enhanced 4D motion theatre, simulators and a renovated Ripley’s Believe It Or Not museum.

When you have Mario Kart and Niagara Falls in the same article, it’s understandable when your imagination goes a little wild. Unfortunately, there won’t be any underwater racing through tunnels but does have a four-storey corkscrew and multiple elevated coaster sections. Does that sound ok to you guys?

Narcity reports that HOCO is planning to launch in the spring of 2018 as construction will finish, and testing will start in October 2017.

Everyone talking about coming to Niagara Falls for the Mario kart track.. well guys it’s in NF Ontario and will be finished in like 3 yrs ??

Me: there’s got to be a way for everyone to come together
The world: we will destroy each other, there’s no hope
Me: https://t.co/oU75mqSfza

In this article:Mario Kart, Nintendo