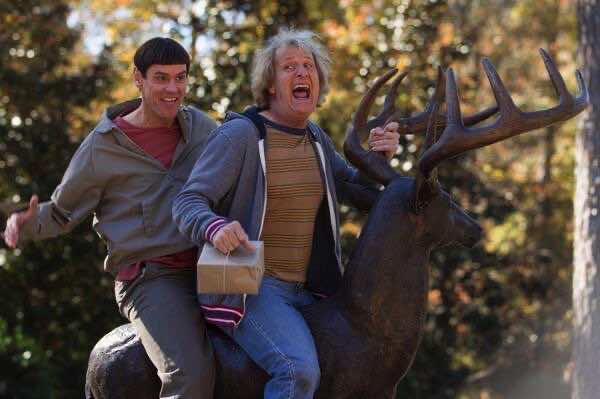 Jim Carrey showed a picture of the first look at his Lloyd Christmas and Jeff Daniel’s Harry Dunne a couple of months ago via Twitter, but now Universal have released the first official shot of them from the set of the comedy sequel.

The shot shows them in their customary attire riding the statue of a stag with what looks like a present in Harry’s hand.

Dumber & Dumber To picks up where the last one left off with another road trip, but this time it’s to go and find the long last child of Harry, who discovers that he has fathered. Maybe the present is for them?

With the 2003 prequel Dumb and Dumberer: When Harry Met Lloyd being as poorly received as it was, mainly to do with none of the cast of crew returning, it will be interesting to see if the Farrelly Bros can pull it off this time with both main men back on board and them behind the camera.

The film is set for release in the UK on December 19.