Arnold Schwarzenegger has been cast as the titular T-800 in Terminator: Genesis for a while now, but nobody could have anticipated a second T-800 being thrown into the mix. It looks like that is set to happen as a now-deleted Facebook post revealed. Aaron Williamson, who is reportedly ready to play the T-800, posted the following:

Thanks to an amazing team of people who help me get better each week, both physically & creatively, I’ll be playing a T-800 (Terminator) in the upcoming production ‘Terminator: Genesis’. I’m extremely grateful & motivated as this new chapter begins to take shape.

It’s hard to anticipate what this will mean for the narrative in the new Terminator film, but we have our bets on Williamson playing a completely separate T-800 rather than a body double for Schwarzenegger.

Williamson commented on landing the role to The Terminator Fans:

I’m not really at liberty to discuss anything w/ regard to this part. My social media followers have been following my journey since I returned to the states from Iraq, which is why I shared that photo; my desire to overcome adversity has really moved people. Where I’m at in my life right now is destiny & it’s truly a blessing. I grew up as a skinny kid watching the original Terminator & was fascinated by Arnold which is the man who inspired my career in fitness. To be a part of this production is a dream come true & a very special moment for me.

Including with the post was an image of Williamson as a T-800. The fifth instalment in the Terminator franchise is being directed by Alan Taylor, and as well as Schwarzenegger, Emilia Clarke, Jason Clarke, and Jai Courtney also star. Terminator: Genesis opens July 1, 2015. 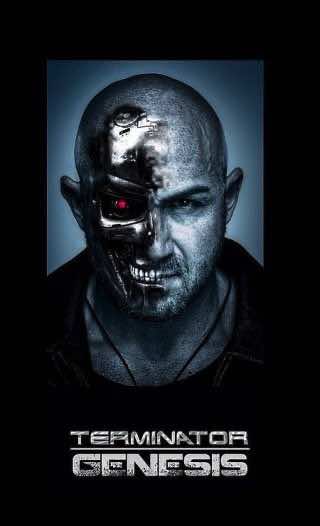