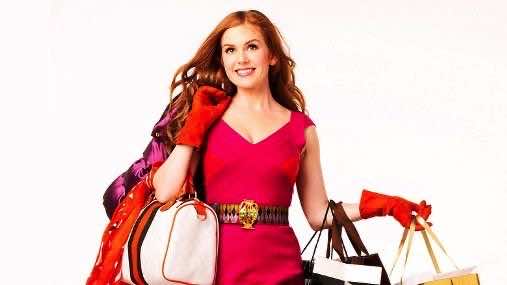 Super shopper Rebecca Bloomwood certainly knows how to dress. Bex may have some serious style in Confessions of a Shopaholic, but she really doesn’t have much of a clue when it comes to her finances. The irony is that even her job at a New York savings magazine can’t stop her seriously out-of-control spending habits; and she still manages to take extra-long lunch breaks to go shopping. Bex wound up in loads of debt that was totally unmanageable, put her job in jeopardy, as well as her relationships with friends and family. With this in mind, let’s have a look at the top things we’ve learned from Rebecca Bloomwood’s mistakes:

“They said I was a valued customer, now they send me hate mail”

Sales staff can be quite persuasive (probably something to do with commission) – don’t listen to them, they’ll tell you literally anything to make a sale. Just ask yourself this: do you really need it?

If your card is declined, you’ve probably maxed it out

It might come as a bit of a shock but when and if it happens, don’t start taking out other cards. Leave the shop swiftly and make a financial plan of action. If your debt seems to be spiralling out of control, check out this handy GoCompare guide to help manage your credit card debt.

Freezing your credit card in the literal sense is a bit of a silly idea. Although it might stop you using it for a bit, you may be tempted to break the ice if there’s 50% off at Gucci.

Don’t be bullied by debt collectors

Even if you tell a little white lie and say the debt-collector’s a stalker ex-boyfriend, he will find you and catch you – then everyone will know he’s not actually your stalker and you’re in some serious financial hot water.

Speaking Prada is not an actual language, nor is it a currency

Although an appreciation for luxury fashion labels is always good knowledge to have, it really won’t help pay off your credit card debts. Try and avoid any shop that’s likely to evoke the big spender in you.

As a credit card isn’t ‘real’ money, it’s kind of difficult to think of it in that kind of way. If you fail to pay your initial bills, you will get stung with more and then wind up paying loads in interest. Make sure you pay your credit card bill in full every month; minimum payments only amount to more interest.

It’s so easy to get caught up in the fashion hype. Having nice stuff doesn’t affect your quality of life, and when you get a huge credit card bill you’ll probably forget about what you actually bought.

Credit cards aren’t magic, if you rack up loads of debt you have to pay it back

Although Rebecca describes them as ‘magic cards’ it couldn’t really be any further from the truth. Every penny you spend on a credit card has to be paid back, sometimes with added interest.

Don’t bury your head in the sand

Probably the oldest saying in the book, but it’s totally true. If you’re worried about money make sure you talk to someone about it and start to put some sort of plan into action. If your spending is getting out of control, don’t be afraid to ask for help – independent services such as Citizens Advice Bureau are great people to talk to.

Cost and worth are very different things

Like anything, cost is completely subjective. You might spend £200 on a green scarf, while someone else finds that price horrific. Weigh up your options and ask yourself if the item is really worth how much you’re paying for it.

In this article:confessions of a shopaholic