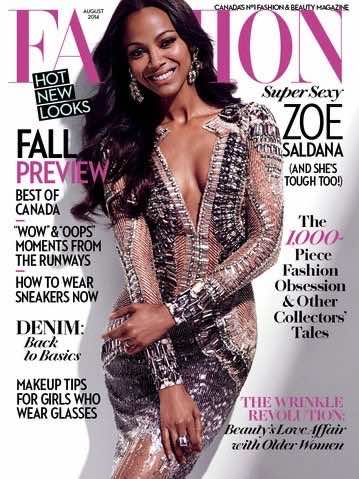 The stunningly beautiful actress, Zoe Saldana is on the August 2014 cover of FASHION Magazine, showing her versatility as an actress. She’s known for her roles as the warrior-princess Neytiri in Avatar and the fiercely woman out for revenge in Colombiana.

In a recent interview with FASHION’s features editor, Elio Iannacci, Saldana, spoke about her upcoming roles in the next installment’s of Star Trek, Avatar and the soon to be released Guardians of The Galaxy. She’ll be playing an alien martial arts master, Gamora. In addition to these up coming roles, she also be playing Nina, a biography of civil rights singer/musician Nina Simone.

She spoke about her marriage to artist Marco Perago and her breakup with Bradley Cooper and she says: “I was finally able to spend time without being in a relationship and even though, it was a short period of time, it was beautiful”. As for her role in the Avatar she says that Neytiri is stronger than what she wanted this time, but also very vulnerable.

Her advice as woman is “It’s important to not have women be afraid of you, to accept your mortality and your aging so that you can be a better mentor for up and coming women. Whenever these young women come and they just want to take everything all at once, just because they’re younger and their asses are harder and plumper, you kind of go, ‘Child, sit down. Yes, you’re beautiful but listen to these 1, 2, 3s.’ 1. Don’t hike up your skirt too much. 2. I’m pretty sure you’re intelligent so act like it. 3. Read a book.”

The August 2014 issues starring Zoe Saldana with be available on newsstands July 14, 2014

In this article:Avatar, Bradley Cooper, fashion magazine, Star Trek, The Guardians of The Galaxy, Zoe Saldana