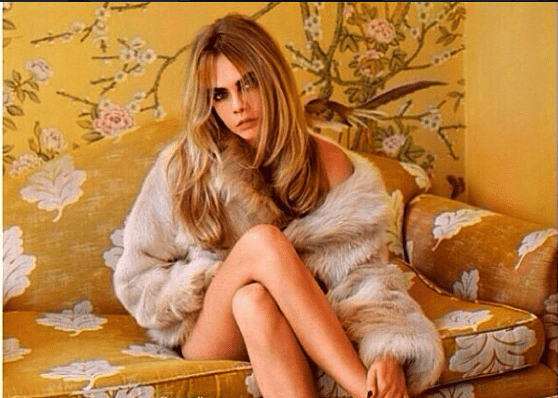 As one of the most in-demand models around, Cara Delevingne’s schedule features appearances at some of fashion’s biggest contracts. Mulberry, Chanel, Vogue, not to mention joining Victoria’s Secret’s elite ranking, Topshop have managed to nab the 21 year old to front their Autumn/Winter campaign, and it’s absolute perfection!

Photographed by Alasdair McLellen and styled by Kate Phelan, Topshop’s creative director, the images are tastefully autumnal and a sentimental wave to the summer season. (Cue sobs) Characterised by florally prints and yellow hues, Cara poses and pouts as she lounges around and strums her guitar, hinting perhaps Edie Sedgewick was inspiration for the shoot…?

The campaign focuses on faux-furs and rock glamour as the popular focus for the new collection, as well as classic shapes and a nod to androgynous tailoring once again. As the only model selected by Topshop, Cara has once again proved why she’s got the credentials and the talent to go far.

As the official teaser to the upcoming release, check out the behind the scenes footage of the shoot and see Cara fall in love at first sight with the prop bunny rabbit, Cecil, who she adopted after meeting him on the shoot. Why not head over to Topshop too!

In this article:Cara Delevingne, london, Topshop