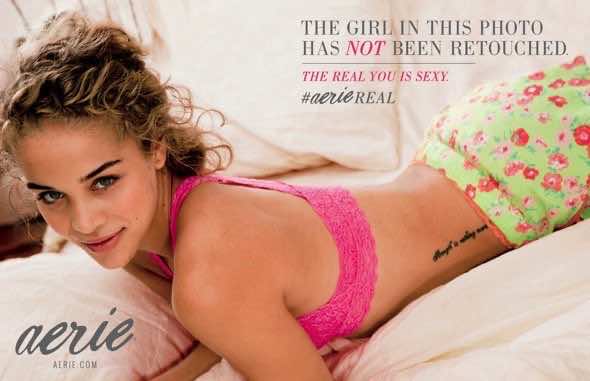 In the midst of the recent Lena Dunham Photoshop commotion Aeries new ad campaign #Aeriereal seems to have come at a perfect time.

For those of you who haven’t heard creator of TV series Girls Lena Dunham graced the cover of Vogues February issue with the aid of Photoshop. Feminist site Jezebel immediately placed a £10,000 bounty on the un-retouched photos in an attempt to reveal how vogue was disingenuously altering the images of women.

It appears the images were not overly Photoshopped, and its seems Jezebel failed in pulling of this insensitive stunt. Yes women need realistic role models but we don’t expect to find images of the ‘realistic woman’ in the pages of Vogue. Vogue is the place for fantasy and dreams.

Photo-shopped images do not take away the confidence and fearlessness of Lena Dunham.

Aerie lingerie owned by American Eagle has decided to drop all airbrushing effects, even the most minimal tweaks for its unretouched ad campaign #Aeriereal.

“We left everything. We left beauty marks, we left tattoos, what you see is really what you get with our campaign,” said Aerie’s style and fit expert Jenny Altman. “It’s a selling point because our customers represent this great demographic and they don’t really get to see what girls their age really look like.”

How big of a challenge is the campaign to beauty ideals? All the girls used in the campaign are slim and conventionally pretty following the same lines which Photoshop tries to achieve. However Aerie promotes a natural beauty to its young demographic instead of holding them to an unrealistic standard. Whilst it might not be a victory in the sense it will not start an overall anti-retouching trend in the fashion industry Aerie itself has tweeted it will not be re-turning to Photoshop.

Overall if the campaign gives one girl confidence in her own beauty it is a victory.