Kylie Jenner is always trying something new with her hair, but her attitude might need a reality check. After taking to Instagram with an image of her latest cornrow hairstyle – captioned “I woke up like disss” – a storm of criticism has ensued. 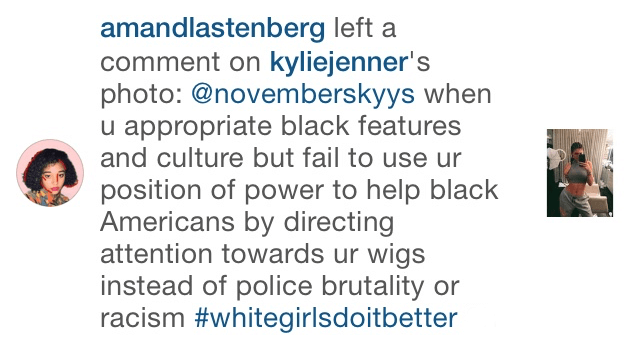 One person particularly offended was The Hunger Games actress Amandla Stenberg, who responded to Jenner’s Instagram post with the following powerful comment: “when u appropriate black features and culture but fail to use ur position of power to help black Americans by directing attention towards ur wigs instead of police brutality or racism #whitegirlsdoitbetter.” Ouch!

In response to Amandla’s comment, Kylie replied “@amandlastenberg Mad if I don’t, Mad if I do…. Go hang w Jaden or something.” Freeze frame… what was that supposed to mean?!

We think Amandla has made a good point regarding celebrities using black culture in fashion but continuing to dismiss black concerns; she has previously shared a video demonstrating her passion for change in this area. Kylie Jenner obviously has the freedom to do what she wants with her hair, but the point Stenberg made was valid in bringing particular concerns to the surface. Kylie’s dismissive behaviour in response was really not ok, and a lot more childish than we’d expect.

After an attack on a predominantly black church in Carolina last month, and continuous police brutality in America against black people, these issues most definitely still need addressing – which is why Kylie Jenner’s attitude towards Amandla’s concerned comment was so shocking.

We don’t know for sure if there is previous history between Jenner and Stenberg, but we think that, given the amount of media attention she receives, perhaps Kylie shouldn’t show so much ignorance towards important cultural issues.