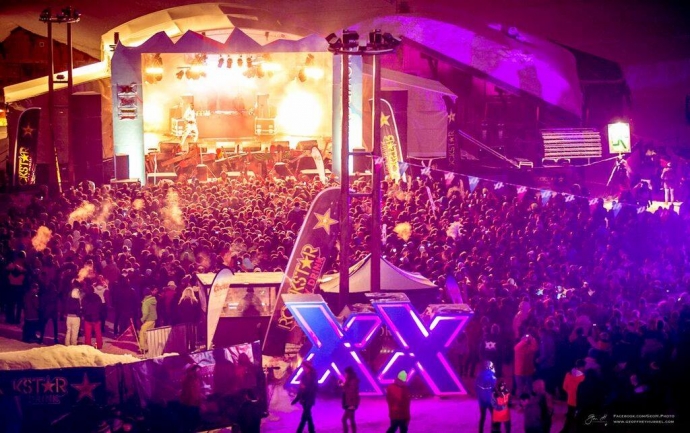 If you’ve ever been to The Masked Ball in Cornwall, you’ll know that it’s a weekend of complete chaos. An event like no other, where the people party twice as hard. I met Kelvin and Zain among many others that made up the Masked Ball team at Burning Man last year. When you party with those boys, it’s hardly surprising that The Masked Ball is as great as it is.

After attending for a few years, I was absolutely elated to be invited to DJ there. Fast forward to 2016 and The Masked Ball team were hosting a stage over at Snowboxx Festival in Avoriaz, France. When Kelvin asked me to play there, I jumped at the opportunity. My descent into a week of non-stop partying with them begun.

Snowboxx is set in the stunning resort of Avoriaz, just south of Switzerland on the Alps, in the east of France. The resort itself boasts a historical atmosphere, with apartments dating back to the 1960s with a very unique architecture. With large pistes everywhere and hundreds of rooms, it was the perfect place for Snowboxx.

The first night hit on Saturday and while the official Snowboxx event hadn’t begun, Kelvin & The Masked Ball boys threw us straight into the chaos that ensued.

We hit the local bar, The Globetrotter. Beer after beer saw us through the night. There was a ratio of guys:girls of about 100:1, but that didn’t stop the fun. 7:30 am in the morning, and the guys were still going. And when I say going, Kelvin and Ed were doing back flips into the snow from the roof of the apartment block opposite!

The next day and we had hit the slopes. Being the amateur I am, I could only watch as the guys hit The Stash, performing all sorts of tricks that I aspire to achieve one day!

Snowboxx had begun, and the main stage was pumping. Starting at around 7 pm and finishing 11 pm on a few nights, it was the perfect amount of time to warm-up for the after parties. During the day, there was an Après ski bar, with a really great, chilled atmosphere and top DJs playing.

The star of the first night was Grandmaster Flash. In the way only the man himself can, he had the whole crowd bouncing to the classic hip-hop sounds of the 90s and beyond. The sound and lighting was everything you can expect from a festival, with no compromises being made on quality. Partying in the snow was definitely a unique experience I’ll never forget.

The debauchery continued throughout the week, with Thursday being the highlight for me. Not just because Sigma delivered an exhilarating set, but The Masked Ball was hosting the night, which ran from 11pm – 3am. I had a opporunity to DJ at the peak time of 2am – 3am, and the place was absolutely bouncing all night. Jac The Disco, Light Layers and Kevin Gitsham were all on before me with top performances that set the bar high. Techno of the finest order.

By Saturday I was completely destroyed. While I settled for a bed time of around 4am every night, the others powered through every day with about 2 hours sleep, the smallest amount of food and a beer in hand at all times. Kudos to the Cornish, as they definitely know how to party.

Snowboxx was an experience I’ll never forget, and being able to play to such a receptive crowd really made for one of the highlights of my year to date.

You can buy tickets for the Summer Masked Ball here: http://summer.maskedball.net

You can visit my DJ page and like for updates here: https://www.facebook.com/nocturnalwatson/