Have you heard of Horizon Festival? No, well sit down my friend and take it all in, as this is NOT one to miss out on.

The idea of trying to compress everything that Horizon has to offer into one neat little article is a feat in itself, so I will try my best to give you the highlights. Then you can go away, and immerse yourself in the idea of spending a whole week in one of Europe’s top ski resorts. Going to secret forest raves, parties in abandoned hotels, or chillaxing after a hard day skiing in the hot tub.

Now that Horizon has outgrown its previous location in Bulgaria, it will be setting up home in Arinsal Andorra, for its fifth year. We are literally counting down the days until we can see why there has been so much buzz surrounding this amazingly unique boutique festival.

Andorra is situated high in the Pyrenees Mountains, nestled in between the French and Spanish borders, easily available from both Barcelona and Toulouse airport. The resort itself offers perfect conditions for both beginner and advanced skiers, alongside everything that Horizon has now become renowned. Mountain top main stages, intimate bars, late night clubs, forest parties, immersive acts and sideshows, all mashed up together with a killer lineup of 120 DJ’s and live acts.

The first wave of artists has just been announced, and following on from the previous years it looks like it’s set to be an absolute belter! Already we have an incredible list of some of the best underground names in electronic music, the freshest new talent and a vast array of genres inclusive of; Grime, Garage, House, Disco, Techno, Funk and Soul. Horizon has it covered from every angle!

House and Disco favourite Motor City Drum Ensemble will be making his debut appearance, alongside Horizon veteran KiNK. Ben UFO and Midland will be treating us to a B2B set, while the grime rising superstar AJ Tracey, and Scott Garcia is offering up the urban flavour. You’ve also got house club favourite Jasper James, and Craig Charles ticking the boxes for the funk and soul fans.

The 7-day festival will all kick off with a pre-party in Barcelona, and tickets for the whole shebang are available now; here You can also read more about the festival on their site; here

Keep an eye out for further updates and news from us along the way, including some exciting artist interviews. 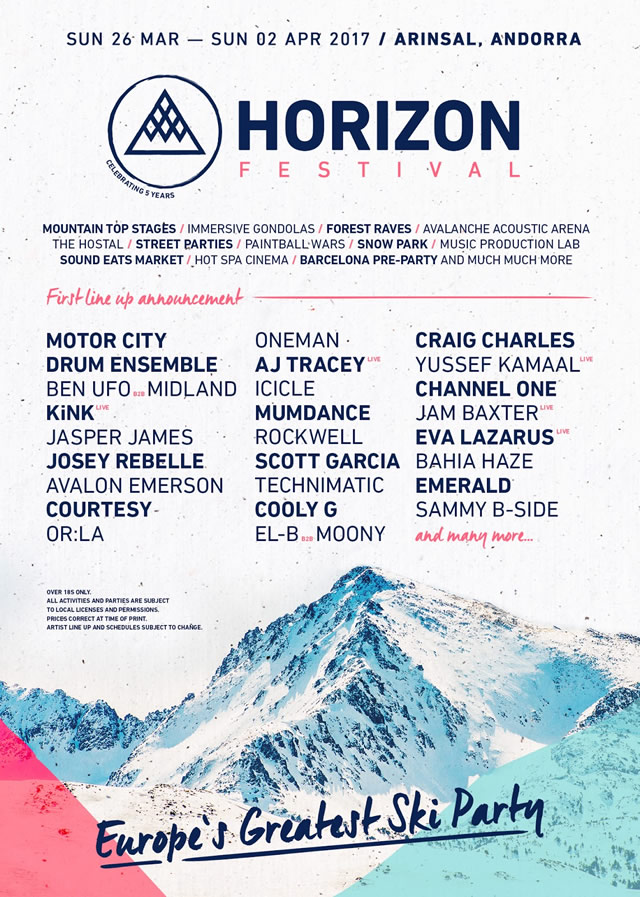