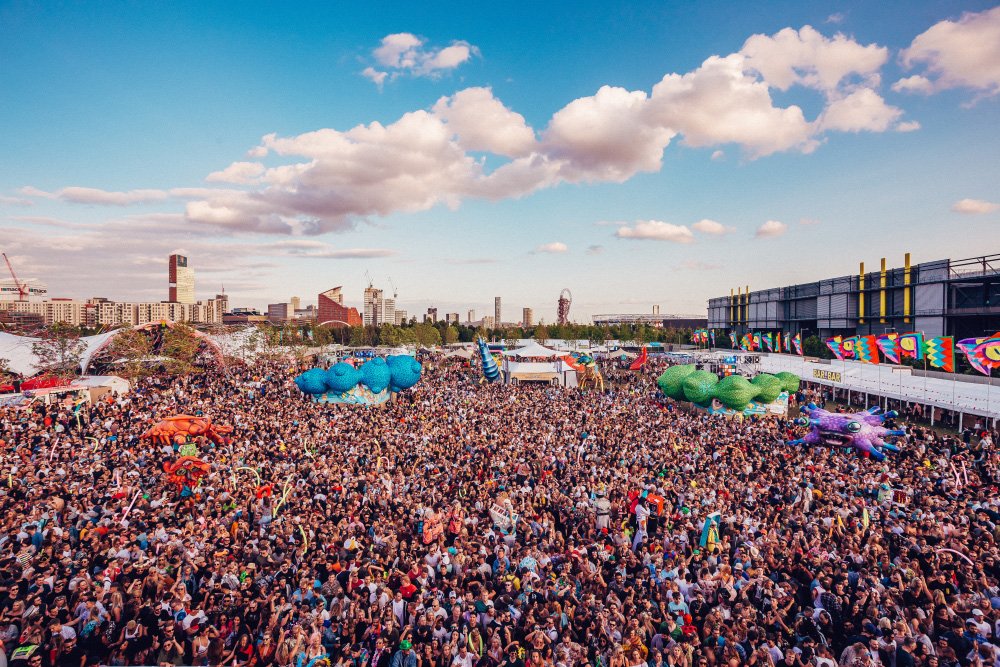 Elrow, the Spanish born party giants, have fast secured a name for themselves as being the bearer of unbridled childish awe and amazement.

When it comes to the immense production levels of their shows, no one can touch them. So, as you can imagine, when we heard about them bringing their jaw dropping show to London, for not only one, but two days of festival-like fun, we had to go and see it for ourselves.

Elrow Town; The biggest ever show held in the UK – popped up in East London over the weekend on the 19th and 20th of August, in the iconic Queen Elizabeth Olympic Park. Teaming up with well known and well loved London promoters LWE, Elrow spared no expense to transform the site into a literal playground.

The weekend’s lineup was full of heavy hitters, both new and old to the Elrow Family. Jamie Jones, Seth Troxler, Eats Everything, Hot Since 82, The Two Bears, Riva Starr, Idris Elba and much more were smashing out some serious beats between them, and the three stages on offer. 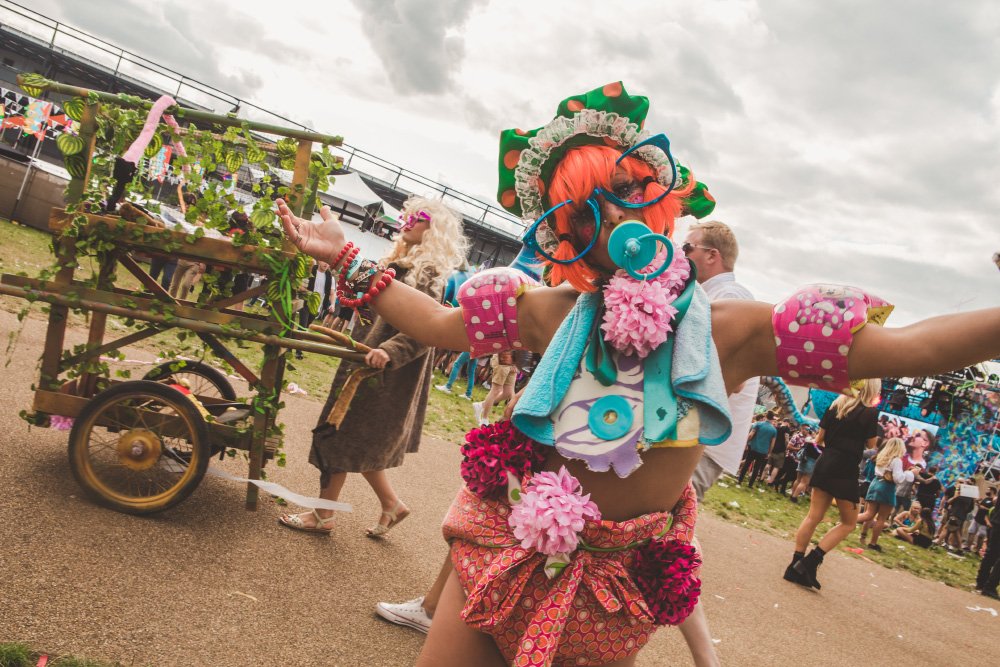 Over the weekend nearly thirty thousand party-loving ravers entered the site to be greeted with an adult sized play-area, inclusive of human foosball, inflatable sumo wrestling suits, inflatable obstacle courses, and an electronic surfboard! It was a refreshing change to note that the play area was, in fact, free for all to use. Ensuring everyone could get into the Elrow spirit! Prizes for ‘winning’ were ‘Elrow Dollars’ which you could swap for more inflatables to swing around in the crowd. As everyone knows tech-house sounds better when you can wave a giant inflatable around above your head!

The main stage, Singermorning; a 4-story shop front with windows on every level, giving you a glimpse into the shenanigans of the Elrow Town inhabitants. It was a constant performance and adorned each character in an array of elaborate costumes and fancy dress. At frequent intervals, the mind blowing puppetry on stilts would descend on the crowd, including a few even on over sized tricycles! You really can’t make this stuff up. And that is the true beauty of Elrow and their Singermorning theme in particular. Quite literally anything goes! 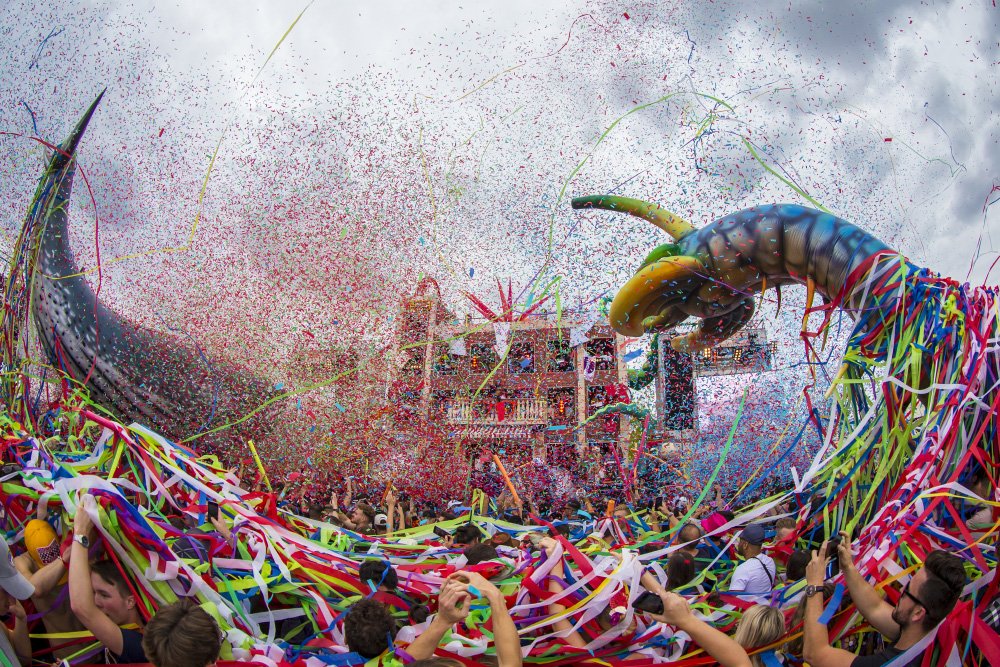 It also wouldn’t be an Elrow party without an actual tonne of confetti. And it wouldn’t surprise me if, there was a confetti shortage following this weekend! But it wasn’t long before the entire site looked like it had exploded with a rainbow of colourful tissue streamers, confetti, and coloured smoke.

The second stage, El Rowica, was home to a more traditional Spanish fare. Surrounded by little stalls offering Sangria, Pinchos, Tapas and Flamenco dancing lessons, again all courtesy of Elrow. It was here that we felt more at home, away from the sometimes generic pump of tech-house. Special mention goes out to the Two Bears who absolutely smashed it with their infectious grooves and pure house party vibes. It was a welcome change from the ‘bruvs’ who’d taken up camp at the main stage for Jamie Jones on Saturday Night. 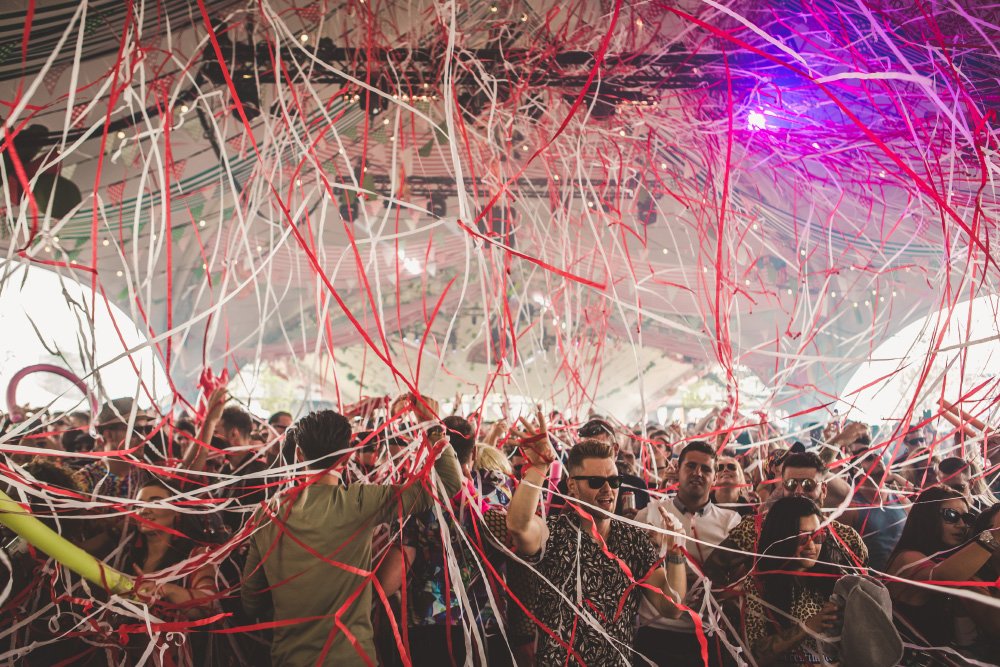 The third and final stage took on the form of Mr. Whompy – a converted ice cream van that delivered bassline, grime and beats, instead of 99’s!

Elrow has continued to raise the bar higher and higher. Their zany toon town type characters, next level performance and production, and consistent promise to deliver a party that you will walk away from, grinning ear to ear. I see no reason why everyone shouldn’t experience such joy and carefree fun. I hope Elrow Town is something we can expect to see more of in future. This party is so big it shouldn’t be contained within four walls (or a ceiling) anymore!

Keep an eye on Elrow and all their upcoming shows on Facebook.