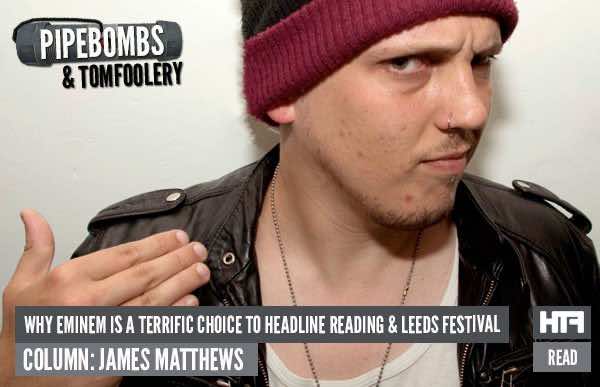 Right I am going to cut straight to the chase, because I am sick and tired of so many hip-hop bashers, and narrow minded cunts that just have no fucking clue what they are talking about, when they come to say that “hip-hop has no place at an alternative festival”.
Umm… *RING RING*… Taxi to the library for uneducated pillocks who cannot see why hip-hop has a LOT in common with alternative music, in fact now more so than ever!

Ok let us start off with a brief history lesson. If you are in the know how, then you will rejoice at the fact as to what I am going to bring up. But for all the narrow minded bastards, and also the curious yet uneducated who are open minded enough to acknowledge this, here are some of the key points in the marriage between hip-hop and alternative music….

Hip-hop was born in 1974 in the midst of The Bronx, New York, precisely at a block party at 1520 Sedgwick Avenue, with the innovator of the genre being DJ Kool Herc. Over the course of the next 12 years, something amazing happened…

In 1986, Run DMC and Aerosmith teamed up to blend together two different styles of music to incorporate a perfect and relentless blend of streetwise ghetto style beats and scratching and MCing, with some dirty raw guitar licks and sublime singing. This was the starting point of what was to break the cultural barriers of hip-hop, and essentially bringing it in to the mainstream consciousness and also introducing a style of music that is essentially and predominantly of black culture, and bringing it in to mainstream white consumerism. Regardless of whether it be for artistic creativity, or for making money, something special was born.

Over the next few years, we saw many different collaborations with the hip-hop community and alternative music. Public Enemy and Anthrax, Onyx and Biohazard (which has possibly THE best crowd footage of all time for a music video), Biohazard and Cypress Hill, Korn and Ice Cube, Limp Bizkit and Method Man of Wu-Tang Clan, Busta Rhymes and Ozzy Osbourne, Gallows and Lethal Bizzle, hell… even Ice-T has his own hardcore / horrorcore band called Body Count, who released one of the most controversial songs of all time with ‘Cop Killer’, during the wake of the LA Riots of 1992.

Additionally, if you look a little closer… rock music actually helped spawn hip-hop. One of the key techniques with hip-hop music is sampling. Some of the most sampled cuts in songs come from artists like James Brown, Little Richard, Chuck Brown, and guess what… Pink Floyd. Check this article to see what the most sampled rock loops are in hip-hop if you want some more to look at.

This is where I got pissed off and replied…. 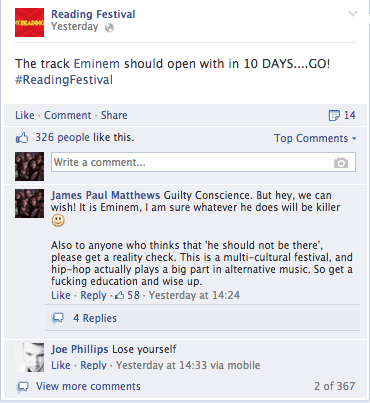 So as you can see… at this rate, 58 likes and counting. I feel highly justified in what I said, but I could not leave it at that. I had to adapt on this on this blog, as whilst I was out at Folk Week in Broadstairs last night, enjoying some fine scotch and watching loads of cool live bands for free with the annual tradition, it vexed me further, to the point where I expressed to one of my friends that “the world can be really full of ignorant cunts who need a dose of knowledge”. Henceforth, we are now here.

Now that I have given a brief yet temporary reminder of just what collaborations have happened over the years but to name a few, let me adapt on the history of Reading & Leeds Festival.

The festival has always championed the diversity of musical genres, but kept it to the point where it would not alienate anyone. Such hip-hop acts like Ice Cube, Public Enemy, Cypress Hill, Beastie Boys, Xzibit, Jay-Z, 50 Cent, Lethal Bizzle, and Dizzee Rascal (although the latter two are more Grime). But still… this is a testament to the beautiful thing called ‘crossover appeal’.

Although I must put this right here… for me, I was there when 50 Cent got bottled to fuckery on the Sunday night at Reading 2004. Now I must stress, the crowd were not bottling him because of their distaste and 50’s representation of hip-hop, they were bottling him because of his current reputation and representation at the time as an individual, merely as 50 Cent. In fact, I would go as far to say that 50 Cent is more so rap, rather than hip-hop (there is a big difference between the two).

Additionally, who can forget that legendary performance that Lethal Bizzle did when he played Download Festival in 2008?! Motherfuckers were bottling him to hell, but he stuck it out and took on the haters, and won all you lot over like moths to a flame. Ultimately, he earned your respect and won over a LOT of fans.

So with all this in mind, and seeing so many people plastering their distaste that Eminem is headlining the biggest alternative music festival in the UK, it just made me sick.

“Oh no, he shouldn’t be headlining it because he is a rapper”, or “he is shit, he isn’t a band!” Like what the actual fuck?

Eminem has done more than he possibly can to earn himself a headline slot at the coveted Reading & Leeds Festival!

Hell, when The Darkness headlined in 2004, I was less than pleased, as they definitely had not earned that I felt, but they were hot at the time and generated money, so that is why they were at the top.

Look at Eminem… he has been going hard for 21 years. He by all means DESERVES that slot more than anyone. He has a huge crossover appeal, he has sold millions of albums worldwide, and more importantly, he is now finding his feet once again and will continue to do what he does best.

Marshall Bruce Mathers III, if you somehow get around to reading this, good on you mate. I hope you fucking smash all the cynics and haters at Reading Festival, and you win them over. I know you will do great. Also, how are your koi carp doing?

Additionally… Festival Republic and Melvin Benn, thankyou for incorporating a more refreshing and diverse approach to appeal to everyone. You are always going to get some bastards moaning about anything and everything. But with the inclusion of hip-hop based acts this year like Eminem, A$AP Rocky, Azaelia Banks, Boy Better Know and the entirety of the BBC 1Xtra Stage, I salute you. Keep on supporting the cultural and musical diversity you so to continually provide. And congratulations on having an eclectic and decent lineup altogether, for me personally is the best you have had in about five or six years.

Anyway, let me wrap this up (no pun intended). Hip-hop / rap, and alternative music are no strangers. They are both in the same playground, just at opposite ends of the yard, waiting to occasionally meet in the middle. Look at your current stars like Odd Future, P.O.S., and other alternative hip-hop stars. It is an ever-growing culture, and believe me by next year, it will reach a very high apex of creativity.

To any narrow minded haters, if you are so ignorant to acknowledge the diversity musically, culturally, and aesthetically, that collaborations like these can bring, then please go and take your typically sullen minded, snide remarks, and bulldog chewing a wasp facial expressions elsewhere. If you do not like rap at your festival, then fucking get over it! Go and see someone else, hey, get an open mind and check out another band you have never heard of and introduce yourself with a musical challenge!

But more importantly, you do not even have to like hip-hop. All I will say is that even if you do not like it, you better damn well respect it, because it will last a LOT longer than your cheap Topshop clothing and current employment status.

Defend open minds worldwide. Support hip-hop, support alternative music, and alternative cultures.
Respect each other, and educate others with wisdom and knowledge that we can all positively share.