We all love ghosts and cars but it is even cooler when these combine. Throughout film history the car has played an important role in the world of spooks, spectres, demons and monsters so we take a look at 3 of films spookiest cars!

Ecto 1 was a 1959 Cadillac Professional Chassis – a car which oozed charisma and individuality. The car belonged to Ghostbuster Dr Ray Stanz (the character played by Dan Ackroyd) after he found it in his mother’s home and fixed it up for the then princely fee of $4,800. Stanz obviously recognised that the immense body of the Cadillac Pro Chassis would be ideal for transporting weighty ghost catching paraphernalia such as Proton Packs and Ecto Goggles. It would appear that the car has been used in real life as a hearse, and it does have an eccentric presence, with its immense chassis quirkily offset by the two tail fins on either side of the rear. The Cadillac Professional Chassis was a car of state with a sense of humour, and therefore perfect transport for a profession such as ghostbusting.

50s American cars became something of a favourite for film directors in the 80s due to their brazen individuality. The film adaptation of the Stephen King book ‘Christine’ opts for a 1958 Plymouth Fury which is a wonderful piece of casting. The front grill of the Plymouth Fury is work of art, resembling the manic fixed stare of the possessed car that it plays in the film. The wide set front lights glower down over the chrome grill as if the car is ready for a rampage. Anyone who hasn’t seen Christine is well-advised to take a trip back into the heyday of tongue in cheek light horror flicks of which John Carpenter was the master; the Thing and Halloween also form part of his formidable oeuvre. 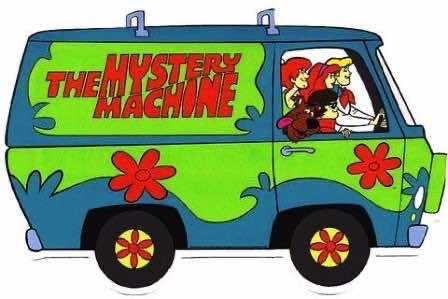 If we’re going ghost hunting with friends what kind of vehicle do we need? The Scooby Doo gang would probably opt for a VW Camper van. The Mystery Machine was never a recognised brand, as the show went through several transformations, so did the iconic vehicle, but a lot of fans of the show have taken to revamping their VW’s in the Mystery Machine mould and it’s a sure fire way to unmask those ghosts and ghouls!

Why not track down a second hand VW Camper and make your own Mystery Machine. Let us know if you catch anything!