A bittersweet rom-com; we’re rooting for Joseph Gordon-Levitt‘s character Tom, a hopeless romantic making any attempt to bowl over Summer (Zooey Deschanel)- his alluring love interest. Enigmatic and interesting, it’s apparent from Summer‘s character that she’s something different, and her effortless fashion of retro cool and modern slick really shouldn’t work as superbly as it does. 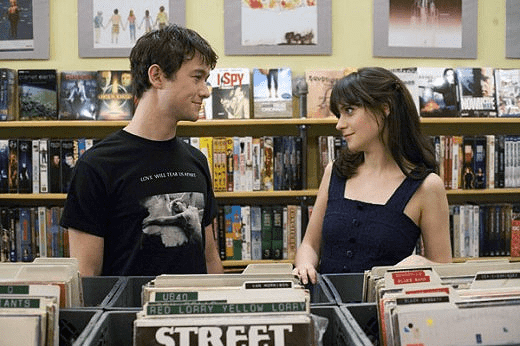 It’s all about subliminal messaging as costume designer Hope Hanafin reveals. Under strict instruction from the director, Hanafin was told to coordinate the entire wardrobe in accordance to Zooey‘s eye colour. Zooey has the most amazing blue eyes, so he wanted her character to be in blue. So she wears it, but more importantly, nobody else does. Everybody chooses colours dependent on personal taste and characteristics, but Hanafin and director Webb take this to the extreme, with almost every single outfit Summer wears being a tone of blue – the exception being a mere one or two shots. 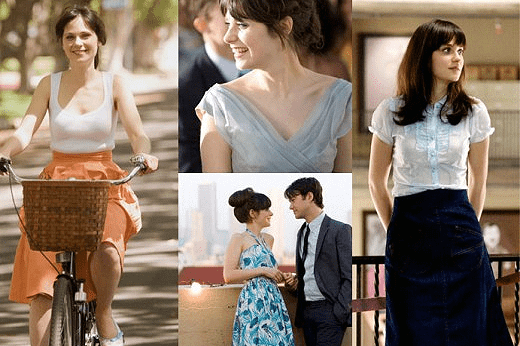 Vintage, vintage, vintage! Hanafin‘s meticulous detail to the costumes creates an interesting collaboration of retro-modernism. “I have great respect for these romantic comedies where secretaries are wearing Prada, I wanted [“500 Days”] to be kind of the anti- Sex and the City.” She’s talking old school styles from Navy, Gap and BCBG, as well as Summer‘s denim skirt from classic meets contemporary label, Built By Wendy. Summer‘s costume is abundant in elegance and sophisticated cuts, with styles taken from the 1950’s. Knee length A-line skirts, loose blouses, bows and floral prints add to Summer‘s carefree and girlie style.

It’s a relief to see Hollywood break away from the mould and use a neutral colour to denote romance. Abandoning the cliched red colour, generically used to portray love and passion, Hanafin compliments Zooey‘s feature to the right tone of blue – then works this around the the story – strengthening the tone of blue according to the mood and emotion at that particular stage of the film. As the the realisation dawns on Tom that his affections for Summer aren’t reciprocated, her distant behaviour is mirrored by the frosty blue of her dress, shown in the still below. The dress’ flirty sway and lively confidence makes Tom’s disappointment more crushing to see. 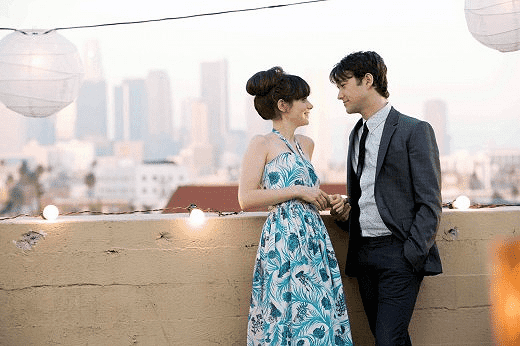 The peacock print dress comes with a genuinely vintage tag, with Hanafin having sourced it from specialist vintage clothing hire company, Palace Costume. Meanwhile, we’re keen to channel Summer‘s style irrelevant of colouring, style and shape. Being such a versatile colour, Zooey‘s blue eyes aren’t a necessity, with cool blues complimenting dark or fair complexions perfectly, and stronger blues giving va va voom to any outfit. Working the denim fashion and hot on trend, Oasis have channeled denim and skater together. Available for £45.00 at ASOS, it’s a creation worthy of Summer‘s wardrobe. 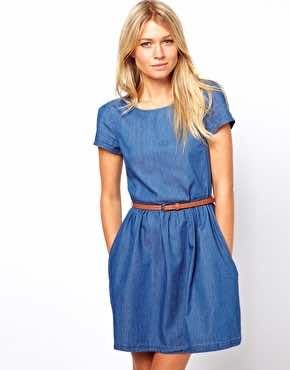