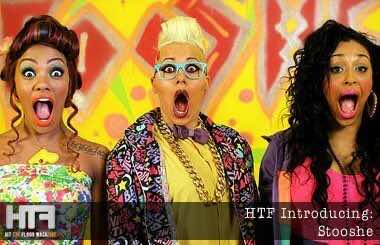 Stooshe, (pronounced ‘Stoo-She’) are three girls from Southeast London about to take 2012 by storm. Not familiar? You will be.

Alex Buggs, Courtney Rumbold and Karis Anderson are the boisterous, mischievous, outgoing and witty talent behind Stooshe. Combining elements of Salt & Pepa, Odd Future, Jay-Z, TLC and The Supremes, Stooshe have become one of the mostly hotly tipped new artists for 2012. Which is probably why they were tipped alongside 14 other acts for the BBC Sound of 2012 longlist, giving their profile a major boost.

Their comical raps and catchy soulful chorus of ‘Betty Woz Gone’ accumulated 100,000 views on the first day of upload and became YouTube’s most viewed music video in the UK and the 14th most viewed in the world.

I can throw their impressive statistics at you all day but it’s their attitude towards music and their distinct sound that got them here. Packed full of provocative, punchy wordplay, cutting-edge choruses and three incredible jaw-dropping vocals, their sound is bold and edgy resurrecting that 90’s sensibility with a fresh sound.

You can catch fresh updates on Stooshe on their YouTube channel (StoosheTV) which hosts brand new episodes from their online video series The Only Way Is Stooshe. And keep an eye out for their electric pink Stooshe-logoed tour van whilst they’re out an about on their adventures, Pimp My Ride would be envious they didn’t create the Stooshemobile themselves!

Check out ‘Betty Woz Gone‘ and episode one of The Only Way is Stooshe below!