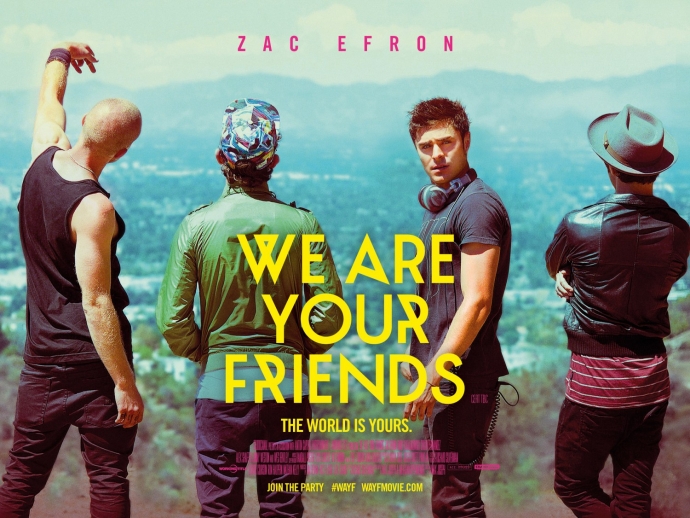 There are those lucky people in life who seem to win every competition they enter and then there are people like me. Until last week, the only thing I had ever won was a Crayola art set when I was 9 because I drew a pretty awesome parrot (it really was great, trust me).

When I received a tweet from the amazing @ZacEfronsCrew telling me I’d won four tickets to the film premiere of We Are Your Friends, I didn’t quite believe it until I was handed my tickets outside The Ritzy Picturehouse in Brixton on Tuesday. Little old me was being allowed to hang out in the presence of Hollywood royalty and experience the showbiz lifestyle for one night only.

Congrats, @Claireyyyy! You have won 4 tickets for you & your friends to join @ZacEfron at the #WAYFPremiere in London! (Check your DM).

After spending a few days Googling what to wear (something fancy but not TOO fancy because I’m not famous and no-one really cares about me, being the answer) it was suddenly time to walk the red carpet. It just so happened that Zac Efron, Emily Ratajkowski and Max Joseph had turned up just before. There were cameras and screaming girls EVERYWHERE and at that moment I’ve never felt like more of a nobody in my whole life. Luckily, I didn’t end up in the background of any photos on the Daily Mail (believe me, I looked) because my jaw was practically on the floor as I walked within touching distance of Zac and Max. I had literally no chill. Like, absolutely none. Anyone watching would be in no doubt that I was just a fan girl in (a not very convincing) disguise. I’m used to standing in crowds watching boy bands, not (almost) rubbing shoulders with movie stars on red carpets.

Once in the cinema, we were greeted with ridiculously comfortable seats right down the front along with complimentary water and crisps. Dream living, right? Before the film started, the cast came up on stage to say a few words and I lost my shit again, only this time more quietly. It’s so weird seeing someone as famous as Zac Efron in real life. I somehow expected him to look different but he in fact looked the same as he did in the poster on my 15-year old self’s bedroom wall (minus the High School Musical fringe, unfortunately). 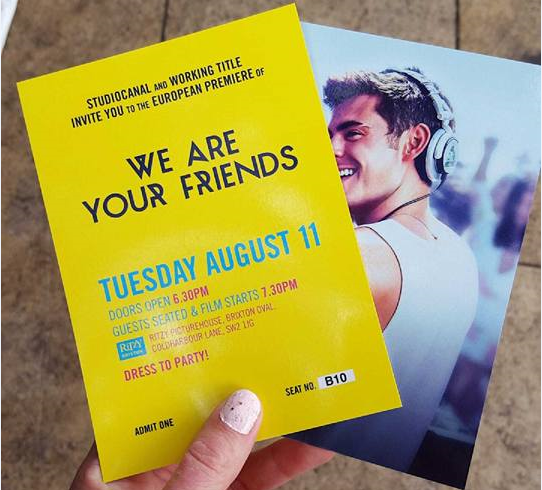 We Are Your Friends was a really great watch – a storyline like nothing I’d ever seen before with an incredible soundtrack that put me right in the mood for the after party. Just a short walk across the road from the cinema was Electric Brixton, full of waiters carrying Mojitos and endless amounts of posh finger food. I could certainly get used to having free stuff shoved under my nose at every opportunity. From the dance floor we (the normos) had the perfect view of the VIP area that, bound by red rope and security guards, once again reminded us that we were the most unimportant people there. After drinking, eating, dancing as much as we could before our last train home, my friends and I left and headed to a place we knew we truly belonged – McDonalds (because let’s be honest, no amount of finger food is as satisfying as a Chicken Legend meal at midnight).

Sitting on a grubby train that smelt slightly of wee with cold chips in my lap, I began to feel like the whole night had been a weird dream. My short but sweet glance into the showbiz world was certainly an amazing experience and one I’m not likely to forget in a rush. Until Zac Efron realises he left the love of his life in London (that’s me, obviously), I guess it’s back to boring, regular life for me.

In this article:#WAYF, emily ratajkowski, london, Max Joseph, We Are Your Friends, we are your friends movie premiere, zac efron