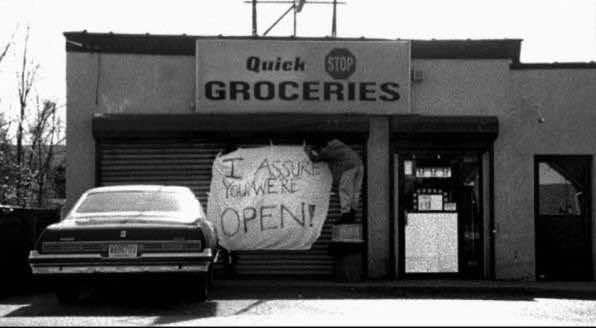 Clerks, the movie centred around two unmotivated retail employees, made Kevin Smith rich, famous, and kind of a big deal. Many of Smith’s other movies including Chasing Amy, Mallrats, and Dogma, are also considered hilariously, inappropriate classics to many 30-something, and 20-something-year-olds. So, with this Clerks legacy remaining very much intact (even with the hilarious second instalment Clerks II, in 2006), here’s what we know about the (hopefully, equally amazing) third movie.

Jeff Anderson, aka Randal Graves, was a guest on Kevin’s weekly podcast (Smodcast), and without giving too much away  he said that this new movie will be different to the first two, “not that different, but different in a different way” – his failure to articulate may have been due to the second-hand weed fumes he was ingesting in Kevin’s office. Regardless, this movie can be as different or as similar as Kevin wants, just be thankful it’s not going to be an off-broadway play, like he originally intended.

According to the writer/director, the first 10 minutes of the movie are in black and white, paying homage to the first film, and the rest is in colour, resembling the second flick. According to both Kevin and Jeff, the third film is a mixture of the two films. It will be gritty like Clerks, and bright and upbeat like Clerks II. It will go back to the beginning stages of the Clerks, but it will show a progression.

You can’t have a Kevin Smith movie, let alone a Clerks one, without Jay and Silent Bob. The fun, inappropriate duo are confirmed to be in this new film, just as much as they were in the first two.

If everything goes right, and everyone is still alive (yes, Kevin actually said that), he’s hoping to start filming in June.

And with all this Clerks III information, we thought it might be helpful to reminisce about what happened in the first two movies, in order to prepare everyone for the third instalment. And for all the Clerks virgins out there, here’s some brief info about these hilarious movies.

The first Clerks movie focuses on the torture Dante is suffering, smelling like shoe polish, fighting with his girlfriend, and having ridiculous interactions with insufferable customers. Oh, and did we mention he’s “not even suppose to be here today”.

Best friend Randal, ignores customers, reads magazines, and frequently leaves the shop unattended to complain to Dante at the Quick Stop. The bored clerks kill time by discussing random topics, like the unfortunate demise of the contractors working on the second Death Star in Return of the Jedi, and Dante’s girlfriend troubles.

The weed-dealing duo Jay (Jason Mewes) and Silent Bob (Kevin Smith) linger outside of RST Video: loitering, moshing, singing, yelling insults at random females, and just generally causing a ruckus. The duo does however take time out of their busy, dillydallying schedule to shoplift from the Quick Stop, bother Randal (and customers) at RST Video, and offer wise words to Dante about his confusing love life – which doesn’t get any less confusing. Source: Clerks

Flash-forward to Clerks II (12 years later), Dante and Randal still work together, except they now work at the fast food restaurant Mooby’s, since Randal left the coffee pot on, and burnt Quick Stop down.

Dante is more hopeful in the second film; he’s all set to move to Florida and marry a rich, attractive female – who he doesn’t actually like, but still. He also slept with his boss, who, contrary to what Jay thinks, is a female, and got her pregnant. The movie focuses on the issues he has choosing which woman to be with. He later makes the right decision, ditches his controlling fiancÃƒ©, and proposes to his boss Becky (Rosario Dawson) instead.

Randal on the other hand, isn’t making any majorly important life choices, until the very end of the movie. For most of it, he’s just happy giving valuable insight into the Hobbit trilogy, “All it was, was a bunch of people walking, three movies of people walking into a fucking volcano”, helping co-worker Elias (Trevor Fehrman) with his confidence, “You can’t get a chick, ya mook. You’re too weird and sad”, and insulting customers with racial slurs, that he thinks aren’t racist. Source: Clerks II

The “song-bird Jesus-freak dealers” Jay and Silent Bob, now stand outside of Mooby’s, and after going to rehab, have found God. They still sell weed, dance, sing, loiter, and harass females, but now they preach too. Source: Clerks II

Like the first film, Clerks II features the usual, stupid clerk-y antics, but this time there’s go-karting, and interspecies erotica. Oh, and prison.

During the film, while they are all in jail, Silent Bob fails to deliver his signature, wise one-liner, and causes Randal to make an uncharacteristically emotional speech about his friendship with Dante. They decide to buy and re-open Quick Stop and RST Video, after Jay and Silent Bob offer to give them the money they got from the Bluntman and Chronic film based on them, to make their mediocre dream a reality. But only under one condition, the duo is allowed to linger outside RST Video, and no one can call the police. That’s fair. Source: Clerks II

The end of the movie is a happy Dante, Randall, Becky and Elias (who has been given a job at RST Video), and a newly re-opened Quick Stop, with the wonderful “I assure you; we’re open” sign from the first movie. 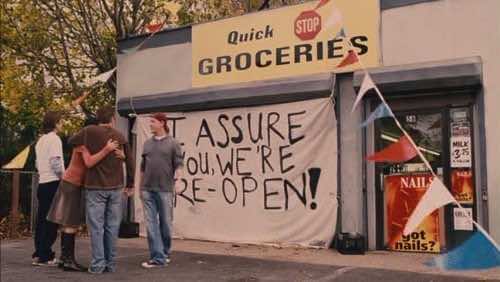 So there it is folks, the stuff that has happened in the Clerks movies so far. We’re really excited for the third film! And hopefully in this new one, Quick Stop can finally be a place where I can buy hub caps for my ’72 Pinto Hatchback. Fingers crossed.