More Than A Bromance: Could Star Wars Propel Cinema Into The Modern World?
Advertisement 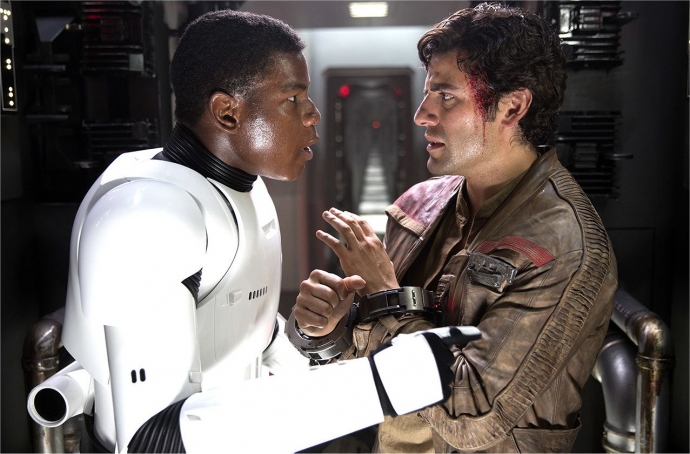 If you’re like most people, you’ve probably been to the cinema to see Star Wars: The Force Awakens (at least twice).

Among many of the questions that have arisen amongst people who have seen the film – including “Who are Rey’s parents?”, “Who is Supreme Leader Snoke?”, and one that a lot of people didn’t see coming, and that is the question of lead character Poe Dameron’s sexuality.

Yes, Poe Dameron, one of the most trustworthy X-wing fighters in the Resistance according to Leia Organa herself, the man who stood toe to toe with Kylo Ren and refused to buckle under the pressure of Ren’s power, could perhaps prefer the company of men.

This could come as a bit of a shock to some, and maybe not for others who may have clicked that the instant chemistry displayed between Oscar Isaac’s Poe and John Boyega’s Finn could be a little more than bromance.

In a film that was called “history making” by Rolling Stone for casting a black man, a woman, and a Latino man as the lead characters – roles in which all three fulfilled their potential and then some, would it really be too much of a stretch to think that JJ Abrams, Rian Johnson and co plan to push the envelope just that little bit more, and have one of the new main characters in the grandest sci-fi franchise of all time be a homosexual?

While it would seem as if equality on behalf of gay people has taken the right steps and become generally accepted in taking them (which is a false assumption), the matter of representation still remains a problem for both the LGBTQA+ community and people that don’t approve of homosexual activities.

If you’ve been watching The Walking Dead for the last two seasons (we don’t blame you if you haven’t) the character Aaron being homosexual, which is sticking directly to the source material, caused quite the stir on social media, with some people praising it as it were the second coming of Christ, and others ranting that it was a sign of the End Times. While LGBT representation is on the rise within TV series’, it is almost non-existent on the big screen; out of 4610 characters in the top 100 films of 2014, only 19 were identified as lesbian, gay, or bi-sexual. Not only that, but 84% of these characters were white males, which would make the Egyptian/Latino Isaac’s character a major rarity in Hollywood.

The supposed backlash that would come in the form of criticism and boycotts is something that this Star Wars team are quite familiar with, after the initial reaction to Boyega’s character, Finn, the galaxy’s first black Stormtrooper and, more importantly, the series’ first black protagonist. However, Finn’s actor has also dismissed the idea in an interview with Shortlist, stating that the romance “was all in Isaac’s head”.

While that seems to be all that will be said for now from the Star Wars camp, it is to be expected, as The Force Awakens and it’s successors would suffer in both China and Russia; one in the top 5 biggest markets for the film internationally, and another where it broke opening day records, respectively. From a business standpoint, it makes a lot of sense to just stick with the bromance between Poe and Finn, as to not offend these two big markets and lose out on millions.

However, in a decade in which inequality is being even more closely highlighted, it appears as if we are a step closer to having a powerful homosexual, lesbian or bi-sexual protagonist in Hollywood. And maybe, in a generation or two, questioning teenagers everywhere will have a fierce and brave protagonist that they can relate to, just like women everywhere have with Rey.