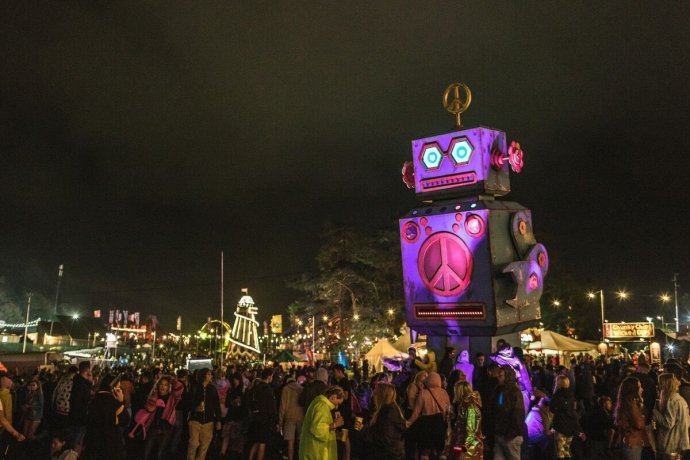 Former Radio One DJ Rob Da Bank and his wife, Josie, started Bestival in 2004 on the Isle of Wight. Its new home in Dorset had a wet and wild start to the new legacy.

Bestival is for people be free to express themselves and love live music. In reality, Bestival works when the sun is smiling. When rain is pissing from the sky for four days and nights, and the wind is spraying mud up ladies’ unicorn onesies, it isn’t ideal. Sadly, this happened at Bestival 2017 at their new exciting home of Lulworth, Dorset; the same location as their sister festival Camp Bestival.

Firmly inside the festival, I quickly find out that being sober and alone is not the right head space to enjoy Annie Mac by the Temple tent. I soon leave the young people dressed in denim shorts, Hawaiian shirts, and espadrilles to throw some shapes in peace as I head to see The Blossoms. I found my way to the stage crowd-barrier amongst new ‘friends’ who are only too happy to hug me against their sweaty chests and offer me delights I quickly turn down.

The Blossoms pull off an impressive set. They deserve a slot on a bigger stage, but the main stage and half the arena was not yet open on Thursday. The entire inhabitants of the festival are now taking shelter inside the tent. I found myself being the delegated waterboy keeping the squashed festival goers hydrated, including a sunken-eyed young lady; dressed only in a bra and skirt, she repeatedly called me a legend because she was sleeping on my back. I just keep counting down the seconds until Jamie T comes on stage to headline the first night. The South-Londoner was in the mood to entertain. I felt like I was holding off a thousand sweaty humans all struggling to get closer to their hero. To survive the frenzy of ‘Sticks n Stone’ and ‘Zombie,’ I held my breath while standing sideways one hand locked on the barrier, the other pointing to the sky during the chorus.

The South-Londoner was in the mood to entertain. I felt like I was holding off a thousand sweaty humans all struggling to get closer to their hero. To survive the frenzy of ‘Sticks n Stone’ and ‘Zombie,’ I held my breath while standing sideways one hand locked on the barrier, the other pointing to the sky during the chorus. 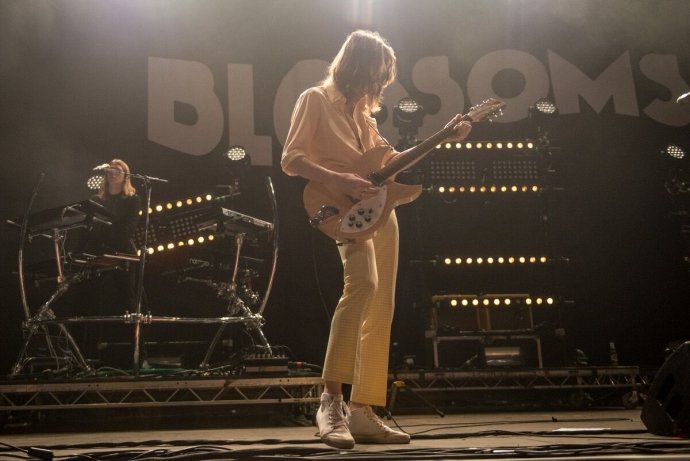 Friday, it’s a welcome surprise to see the festival in the day and fully open. Though surely this is not a festival to be enjoyed underneath a blackened sky. The theme of the festival is ‘colour,’ but mud grey seems to be the dominant colour of the day. Everyone appears to be in good spirits, and many have improvised rainwear out of bin liners and discarded cardboard.

British urban legends Soul 2 Soul are on the main stage. Jazzy B kept cool behind the decks while an impressive full band tried to keep the party moving despite the rain. Two random men in their 40s find friendship in front of me through a mutual love of 90s nostalgia. They share tins of cider and hugs and smiles until the last chime of ‘Back 2 Life’. They then realise they are just two strangers as they awkwardly make their excuses and part; this is surely what makes a festival, short time friendships.

The Cuban Brothers played their traditional slot and had played every single Bestival related festival to date. A few confused audience members question if some white guys dressing up as Cubans is racist, maybe if they were called the Bombay Brothers, it’d be a different story, but they stay the right side of the controversy with a mix of comedy with hip-hop and breakdancing. Perfect.

I was worried that The xx’s show might be a bit slow and portentous to encapsulate a crowd for 90 minutes; I was very wrong. It started out like half a dozen songs and slowly fell in love during their set. Yes, they may try too hard to be cool and have really cringe dance moves, but Romy Croft came across as adorable, and they even managed to mess up a song so they are indeed human and can be adored. Many of the audience did start to trickle out throughout their set as they may have needed some more BPMs to keep their Friday night pumping. I did not and was in bed by midnight. I am a legend. 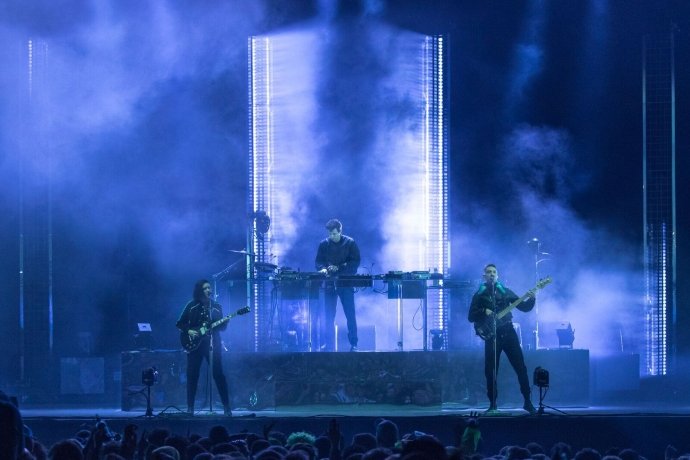 Saturday continued with the rain, more mud, and increasing sadness. I Ignored the variety of uptempo dance music and morning yoga and headed back to the comedy tent for some much-needed laughter. Jayde Adams impresses with her operatic skills and charm, but Tony Law and Bobbie Dixon really struggle to win over the audience who care more about their phones and hiding from the weather than anything on stage.

Rag ‘n’ Bone Man bought the sunshine on the main stage. What a voice and what a charming fellow. Although, it is easy to be distracted when a man riding an inflatable flamingo almost manages to sail his way over the heads of the crowd. Sidenote: he just failed to make the stage. An acoustic version of ‘Skin’ provides a Bestival sing-a-long that brought a tear to a girls eye; then a man with a giant penis starts hitting balloons into the audience, and we were reminded that we were at Bestival.

Dizzee Rascal followed the big guy with a mix of his tracks from his new album Raskit and classic hits ‘Wot U Gonna Do?’. It reminded us that – hey, it is hard being Mr. Rascal and being respected by his peers. But it’s not until he dropped ‘Fix Up, Look Sharp’ and ‘Holiday’ that the party started. ‘Bonkers’ brought the set to a close and out of nowhere a parade of delinquents start a massive mosh-pit; it was time to make a sharp exit.

Rain stopped, and there’s time to kill before Twin Atlantic play The Box, so I explored the Ambient Forest. Covered in lights, balloons, and mystery, it was a perfect location for a couple of romantic festival goers to enjoy some quiet corners to get to know each other…physically.

Inside the Big Top Stage, Skinny Girl Diet trio was playing to a couple of dozen people and one must have wondered why they were playing so high up the schedule? Those who stood and watched the punk three-piece were still at the front barrier for Twin Atlantic. By the time the Glaswegians hit the stage, and the place was packed. Twin Atlantic rocked the tent, and it was rather nice to hear a guitar-solo and have witnessed some stage acrobatics. But strangely for a headline act, they played for less than an hour. It allowed me to catch the second half of the hip-hop legends Tribe Called Quest perform their farewell set at The Castle Stage.

A brave show since losing their founding member Phife Dawg last year, but sadly, except for die-hard fans at the crowd around me, people seem to be impatient and keep chanting for ‘Can You Kick It?’. The trio on stage has not aged too well especially when they keep playing their 90’s music videos behind them as a reminder of their former selves. They leave to a few tears from the passionate Tribers, and I bid farewell to the site for another night. 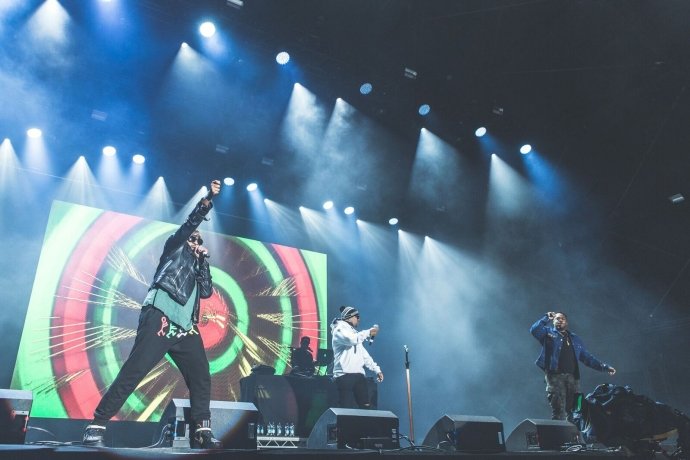 Sunday arrived, but the site was closed for most of the morning and afternoon due to weather issues with the high winds. Apparently, this caused queues of traffic in and out of the venue, and by the time we were allowed back into the main arena a naturally low had settled over the festival.

Circa Waves made their planned time-slot on The Castle Stage though play for 15 minutes less than scheduled. They said they were about to head home due to the previous delays before being told they were on next. The Liverpool indie band did their best to reignite some love into Bestival with ‘Wake Up,’ ‘Stuck In My Teeth’ and an energised version of  ‘Young Chasers’.

While waiting for Soulwax, there was time to have a wander around the site and to see if there was any debris from the storm. Luckily the Kanye West bouncy castle was still standing; nothing can break Kanye! But one surprise highlight was Gospeloke where a brave (usually intoxicated) volunteer chose from a hymn sheet and sang a classic pop hit backed by a gospel-choir; it was a delight to watch and take part in the choruses.

Justice’s last-minute replacement is the Belgian Dewaele brothers, a band that included three (yes three) drummers! Their stage and set up left me gobsmacked – they focus on their latest album From Deewee which is an electro album recorded live in a single take. They manage to use a seven-piece band to create the sound of one computer. There is little stage chat, and they perform for an uninterpreted hour of music, dropping in a few old favorites like ‘NY Excuse’ and ‘E Talking’ seamlessly alongside their new material.

A quite stop off at the urinals created one of the saddest sites of the weekend, where someone had started to write on the fence that he loved Sa…. but then a floating Sharpie revealed why the statement of love was never completed and that his love didn’t stretch as far as getting a wet hand.

The Pet Shop Boys took to the stage in their fabulous way, emerging from circular screens dressed in some impressive headgear, shades, and suits Neil Tennant followed their opener ‘Inner Sanctum’ by enthusiastically exclaiming “we all survived, you are all amazing”. A much-needed compliment for the surviving members of the good ship Bestival; using their last remaining energy to dance to some classic 80’s pop. The duo performed ‘Opportunities’ but save their biggest hits for the final third of the set – maybe spending too much time on their most recent albums for an audience who aren’t their regular fan base, but ‘The Sodom And Gomorrah Show’ goes down a treat. They threw in few crowd-pleasers along the way with ‘It’s A Sin’ and ‘West End Girls’ with a banquet of lasers and costume changes backed by three talented multi-instrumentalists dressed in helmets reminiscent of TV show Knightmare if set in the year 2100. They climaxed with a set of classic PSB anthems, including ‘Domino Dancing, a reworked ‘Left To My own Devices’  and ‘Always On My Mind’.

I wandered away from my wet and wild adventure and the images of big rubber cocks striking balloons and half-naked bodies rolling in the muddy swamp filled my mind to the soundtrack of fireworks flying overhead signally the end of the last festival of the season. I eventually found my Mitsubishi Colt and after three random gents helped retrieve it from a muddy grave, I stripped off my muddy garments placed a best of Erasure CD into my stereo and headed home for the final time for a hot bath and a cup-a-soup. It may not have been the perfect weekend, but it was certainly memorable.