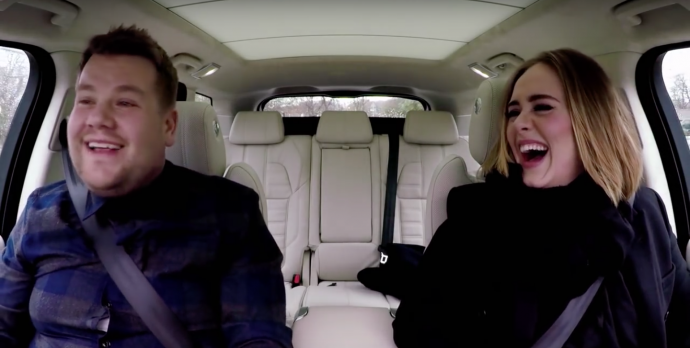 James Corden’s popular sketch ‘Carpool Karaoke’, part of his American tv show The Late Late Show, sees the British comedian drive around with well-known artists, whilst singing along to their hits and sharing some personal stories.

Last week the Internet went crazy over his latest episode, which saw Adele take to the passenger seat. But many other artists have got involved before her and we’ve put together the most entertaining ones for you to enjoy. Trust us, you won’t be disappointed!

The first singer to take part in Corden’s Carpool Karaoke was American superstar Mariah Carey. When the intro to ‘Always Be My Baby’ began to play, Mariah pulled out her diva card, immediately saying “I’m not singing today”. But don’t’ worry, that quickly changed as the journey went on, as they sung bits of ‘Fantasy’, ‘Vision of Love’ and ‘Thirsty’, in between pretending to do a range of accents from British to Southern.

Prev1 of 5Next
Use your arrow keys to browse
In this article:Adele, carpool karaoke, james corden, justin Bieber, Mariah Carey, One Direction, Stevie Wonder