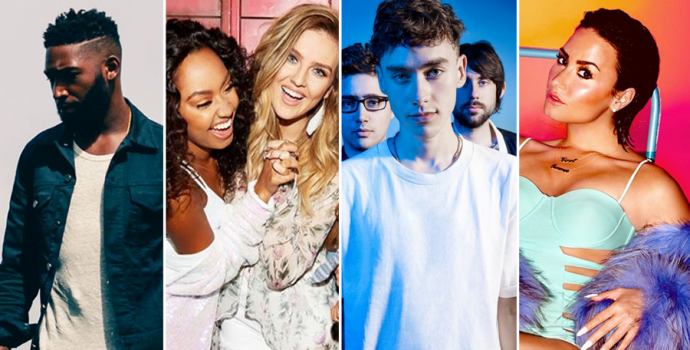 We’re excited just writing this post because not only does it mean summer is finally here, but it also means that there’s guaranteed to be a multitude of cracking tunes to come with it. Some of our favourite pop pioneers are set to release some big tracks over the next few weeks, some having already been released. Grab your earphones, and enjoy our list of the top ten tracks that will help make this summer one to remember!

We haven’t seen a single from Fifth Harmony since ‘Boss‘ debuted after last year’s X Factor UK performance. However, there’s a phrase that reads ‘good things come to those who wait‘ and it certainly finds itself to be true in the case of ‘Worth It‘. Compared to previous single ‘Sledgehammer‘, the quintet have upped their style with a much more mature sound. It’s just as much as the Saxo-club-banger that Jason Derulo’s ‘Talk Dirty‘ ever was.

Usually the promise of summer holidays gets us hyped, but not for Maroon 5, and they’re making it pretty clear. In ‘This Summer…‘ your ears will treated to sounds of eighties disco-funk alongside the soulful falsetto of frontman Adam Levine. Despite the song’s gloomy message, the band keep their sound consistent with a catchy chorus that sure eases those break-up blues.

Little Mix have worked their charm with ‘Black Magic‘ and you can’t help but fall under their spell. In true Little Mix fashion, the song begins with some fist-pumping ‘Salute‘-style acapella before the electric guitar drives the song into an irresistible concoction of funk and pop. The music video is just as adorkable and bound to please fans all-round.

We’re not too sure about you, but there’s something about Foxes‘ new single ‘Body Talk‘ that makes us want to put on our skates and head to a roller-disco. Taking her sound back a few years, the beauty explores a steady balance of pop and electronica as she tries to dance her emotions away. She also looks fab as she does so – simply check out the music video!

Here’s a pairing that you’d never think to hear. It’s safe to say that Nick Jonas has officially shed his reputation as a Disney sweetheart in his latest feature on Sage the Gemini’s new track ‘Good Thing‘. The track is a sublime blend of mid-tempo electropop with a R’n’B twist making it the perfect poolside jam. Accompanied with Jonas’ enticing falsetto, Sage seems to have found an ideal match for making ‘Good Thing‘ a UK breakthrough hit.

On his latest track with Jess Glynne ‘Not Letting Go‘, Tinie Tempah stated: “Both being Londoners, I wanted to make a song that captured that London summertime feeling which is always the best time of the year”. He’s done exactly that. Tinie takes control of the melodic verses whilst Jess belts to the groovy chorus. Her “Oh Ohs” are just as catchy as they were in her first hit ‘Right Here‘.

Bound for chart-topping glory is ‘Glitterball‘, the upcoming track from Sigma and Ella Henderson. Funnily enough, the song boasts the thumping piano of ‘Nobody to Love‘, packed with the drum and bass of ‘Changing‘. However, it’s Ella’s soul-stirring vocals that lift the track to its full potential. If you’re off to any festivals or even out at the weekend, you might as well familiarise yourselves with this banger.

3. Demi Lovato – Cool For The Summer

Whilst June seemed to be a pretty calm month, Demi Lovato suddenly caught our attention with the announcement of her new single ‘Cool for the Summer‘. A week later, the track surfaced and we can’t get enough of it. One of Demi’s cheekiest songs to date, the track explores an evocative summer romance to a chaotic, pop-rock melody. Whilst the weather hasn’t been exactly ‘cool‘ here, listening to this song certainly makes our days much more bearable.

If we’re being honest, any Years & Years track could happily sit on this chart, ‘Shine‘ just so happens to be the most recent. Following up ‘King‘ wasn’t going to be easy but again, the trio have succeeded with their perfected fusion of casual electronica mixed with Olly’s delicate vocal prowess. Keep in mind that their debut album Communion has also been released within the past week, so it looks like our summer is sorted.

If there’s a song that perfectly captures what summer is all about, it’s Sam Feldt’s ‘Show Me Love‘ featuring Kimberly Anne. It modernises Robin S’ 1990s club classic and completely transports you to the beaches of Hawaii with it’s tropical instrumental. Released this week, the track has been steadily climbing up the UK charts and is sure to be following you around for the next few months. Let’s hope its festive vibes foreshadow the summary season to come.