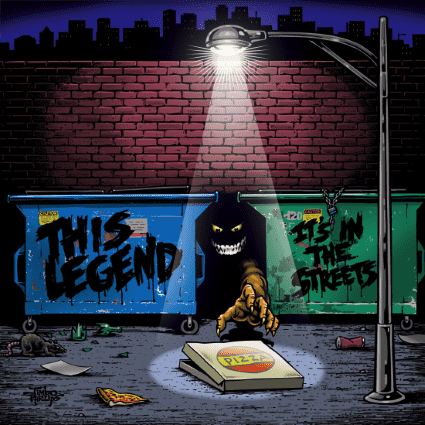 You may have heard that earlier this year, Longineu W. Parsons III departed from Yellowcard after 17 years as the band’s drummer, but have you heard of Ben Harper? The guitarist was one of the original members of Yellowcard too, and has now teamed up with his former bandmate to create a brand new pop punk project by the name of This Legend. The group which has also recruited Chris Castillo of Stanley And The Search on vocals, and HeyMike!‘s Steven Neufeld on bass guitar are set to drop their debut album It’s In The Streets early next month.

‘Lyrics With My Pen‘ is first up, and immediately it is made clear that this is in no way ‘Diet Yellowcard’ but an incredible calibre of unique pop punk from a group of seasoned musicians. The band’s sound holds similarities to the likes of New Found Glory and State Champs, with the slick professionalism of the first and the fun beats of the former, which as a result creates tracks that are certain to open up the pit.

Unlike some debut albums which have been known to be tentative to prevent pushing any boundaries, This Legend take all risks with this album because they can, and it pays off in songs like ‘Feeling Like I Should‘, which has thoughtful lyrics and a breakdown that will have some pop punk frontmen drooling over it. Title track ‘It’s In The Streets‘ starts of a little slower but still strong in its opening, showcasing the band’s skill instrument-wise before the vocals kick in. Parsons shines through particularly here, his drumming tying the song together and making it seamless.

The 12-track record continues on and has a lot to offer, including an anthem by the name of ‘Skin & Bones‘. A nostalgia trip to early 00’s punk, this one is for any older Yellowcard fans that might potentially be drawn to this band and their album. In contrast, ‘I Deserve Better‘ is one of those songs that provokes all kinds of feelings. Up there in the ranks with classics like Fall Out Boy‘s ‘Thnks Fr Th Mmrs‘ and Hawthorne Heights‘ ‘Ohio Is For Lovers‘, if you’re feeling blue then you can definitely let out all your emotions while listening to this masterpiece of a song.

Despite the fact that some Yellowcard fans may still be bitter over the lineup change that, in result, created This Legend, there’s no doubt that sometimes when band members leave to pursue other music projects, it’s often for the best. It’s In The Streets is a great example of that – four talented individuals have come together to create a record that is home to some intense, phenomenal music that even the most tentative of fans won’t be able to resist.

In this article:rock/metal, Rock/Metal Review