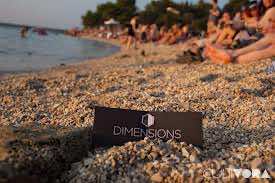 Dimensions Festival, which cruised into its second year this earlier this September, is definitely the connoisseurs choice of a Croatian Festival getaway. Brought to you by the folks behind Outlook, and carried out in the epic abandoned Fort Punta Christo, the four day event boasted a line-up that only the most daring of organisers could hope to pull off. And that shit was pulled. In its truest form, it’s techno. It’s House. It’s bass. But it’s so much more. Line up posters featured Model 500 next to Lonnie Liston Smith and Ben Klock billed next to Tony Allen. Was Dimensions just an iPod shuffle too far? Hell no. It was inspired.

The Thursday evening, and the inaugural night of music, certainly packed a punch. Move D set the main arena alive with a characteristically bouncy house set, whilst the big man himself Andres dominated the Outside The Fort stage, letting his own productions mix seamlessly into the best type of hip hop all with a generous helping Detroit house. But Dimensions wouldn’t be Dimensions if there wasn’t some gruesomely good techno being blasted out and that box was ticked by Karenn – aka Pariah and Blawan. Their set was just what you’d expect, heavy, hard and a hell of a lot of fist pumping (myself included). But – and here’s where we give a round of applause for the Dimensions timetabling team – punters were given the option of finishing the night on a much funkier note, with Eglo wunderkid Floating Points playing out until the sunrise, jazzing out so many people that it nearly became a health hazard.

Friday broke, bleary-eyed and dry-mouthed, but Dimensions knew exactly what elixir to provide its guests. A beach party, hosted by the Mancunian Maestro himself, Mr Scruff. Vibes were so large that tectonic plates moved, personal highlight was a spin of Hot 8 Brass Band’s ‘Sexual Healing’ which makes even the grumpiest of frowns revert to its flipside.

Musically, Friday night exemplified why Dimensions is so special. Starting off with stunning live performances, punters were able to indulge in their softer side. For a moment one could forget the craziness of the Fort and lose themselves in an array of beautiful sounds. Andreya Triana set the stage alive, showcasing both new and old songs whilst having grade A banter with the crowd. Final song ‘A Town called Obsolete’ really went to *ahem* town and the use of live sampling made everyone around sit up to the fact that Ms Triana is someone worth talking about (as are her array of patterened suits, oh my).  Following this came the real jewel in the crown – Lonnie Liston Smith. The creator of jazz-funk played an incredible set with a supporting band that succeeding in gobsmacking each crowd member with their incomprehensible talent. Whoever sat in an office and thought ‘Lets book the godfather of Jazz-Funk for dimensions this year’ was maybe laughed at, and maybe doubted, but it sure as hell paid off. But, it didn’t stop there. No sooner was Lonnie off the stage when the main Fort roared into life. Surgeon played the first of his two sets, bass-y techno closing with ‘I Love Marijuana’ by Linval Thompson – to the bemusement of many a face. This was followed by Blawan who uncompromised once more. Choosing to the end the might on a less 4/4 note, I tripped over to Daphni where Dan Snaith played an impeccable set to take revelers into the sunrise.

It’s really hard not to be over flattering when it comes to dimensions – but it was the gift that kept on giving. Saturday night started with Jazz drumming legend Tony Allen who, in a similar vein to Lonnie Liston Smith, provided the audience with some respite from the deep throbbing of the bass and techno filled arena. Other performers that gave top class performances were Funkineven and Omar S, the former of which also showcased his brand of laid-back DJ cool and a few dance moves behind the decks in between playing out his sublime productions in amongst some serious funky house. But breakout set of Saturday night came from Detroit fresh face Jay Daniel. Billed as the next Kyle Hall there was a definite buzz about his set, played out in the emphatic Fort’s Moat, and Jay Daniel didn’t disappoint. An acidy set of Detroit house and techno, the talented young man certainly cemented his name on the scene.

In fact the only down-time at the festival came in the form of a boat party. With over 30 to choose from it really does become a game of roulette and although Brighton-based party starters Aka Aka Roar probably had good intentions when they organised their boat of Marcellus Pitmann, Rick Wilhite and South London Ordnance, the actual event fell pretty flat. An absence of Pitmann and far too many ’18-30s’ style snap-happy student  PRs really made what could have been an incredible experience, pretty crap. Aka Aka might have a Roar, but it certainly didn’t have any bite.


As the Sunday broke over Fort Punta Christo, and the last day of music was upon us, revelers were treated to another stellar line up of music, Pantha Du Prince live sampled to his heart’s content and Pev and Kowton played consecutively, a highlight being that stormer of a track ‘Raw Code’

However, when it came to the crunch, only two words were on people’s minds – Three. Chairs. The Detroit superband of Theo Parrish, Moodymann, Marcellus Pitmann and Rick Wilhite played for a huge 9 hours and the god vibes spread all the way to Detroit and back again. As the rain fell and dusted down on people’s faces, every smile in the house was stretched to full capacity – a perfect way to end a perfect festival. And as for next year I can only hope the organizers reset their iPods and shuffle it all over again.
In this article:Andreya Triana, bass, Blawan, Dimensions Festival, house, Pariah, Techno